Isn’t it GOOD to have a President who LOVES America again?

Those who watched Trump’s Presidential Address will remember one moment — in particular — for a long time.

In that moment, there was hardly a dry eye in the house.

We refer, of course, to the honoring of both Ryan Owens, and his widow, Carryn.

Owens — the U.S. Navy Special Operator, Senior Chief who paid the highest price on a raid in Yemen on January 29th — was singled out for special recognition for his sacrifice. Here is the clip:

My budget will also increase funding for our veterans.

Our veterans have delivered for this Nation –- and now we must deliver for them.

The challenges we face as a Nation are great. But our people are even greater.

And none are greater or braver than those who fight for America in uniform.

We are blessed to be joined tonight by Carryn Owens, the widow of a U.S. Navy Special Operator, Senior Chief William “Ryan” Owens. Ryan died as he lived: a warrior, and a hero –- battling against terrorism and securing our Nation.

I just spoke to General Mattis, who reconfirmed that, and I quote, “Ryan was a part of a highly successful raid that generated large amounts of vital intelligence that will lead to many more victories in the future against our enemies.” Ryan’s legacy is etched into eternity. For as the Bible teaches us, there is no greater act of love than to lay down one’s life for one’s friends. Ryan laid down his life for his friends, for his country, and for our freedom –- we will never forget him.

To those allies who wonder what kind of friend America will be, look no further than the heroes who wear our uniform. (H/t to VOX for the written transcript)

Ivanka, sitting beside her, offered comfort. 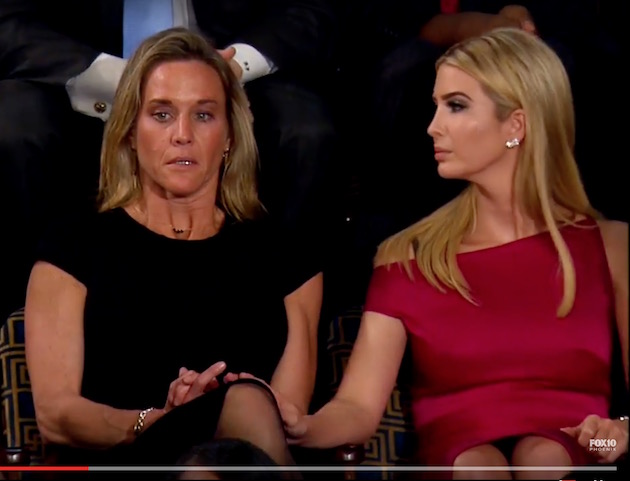 How her detractors will square this with their ‘personification of evil’ description of her is anybody’s guess. They’ll come up with something, to be sure.

And before she gets written off as doing this somehow ‘for show’… Here’s another shot of the interaction between Carryn and Ivanka. 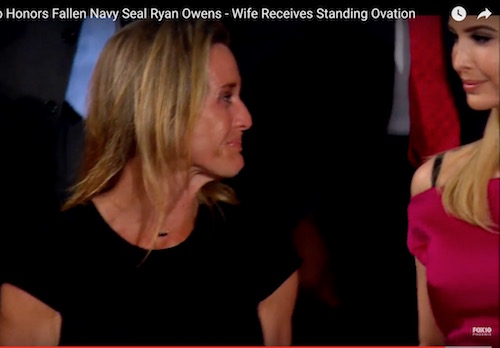 For those of us sick to death of the ongoing contempt we saw of the flag and those who serve by both Obama, and his Democrats, this is truly refreshing.

What triggered that ovation that goes ON and ON and ON was Trump telling what Ryan’s sacrifice accomplished. And how his legacy is ETCHED into Eternity.

The thunderous applause we heard was that of a grateful nation.

‘Ryan is looking on, right now. And he is very happy because I think he just broke a record.’ (Trump meant, of course, the seemingly endless grateful applause of those in attendence.)

It’s GOOD to have a President that clearly CARES for those under his leadership again.

It is GOOD to have a President who is more impressed by the Courage of someone who willing laid down his life for his country, than he is by the mothers of those killed (sometimes justifiably) in violent encounters with law enforcement.

It is GOOD to have a President who more impressed by the courage of men and women serving in harm’s way than he is of the ‘courage’ of someone publicizing his sexual habits and preferences.

The very things that made America Great in the first place.