Can he REALLY be this stupid? Apparently.

The fumble with equating ‘fake news’ with a racial slur wasn’t bad enough.

Cuomo is all-in on the Social Justice War.

An issue that wasn’t even on anyone’s RADAR three years ago is now the you-are-immoral-unless-you-comply Leftist bully issue of the day.

And Cuomo doesn’t even care WHO it hurts… even children.

There was a time when a Democrat would be OUTRAGED if anyone not named Clinton or Polanski were to expose himself to an innocent young girl.

Because the innocence of Children is a GOOD and PRECIOUS thing.

Let them become sexually aware adults in their own time. Don’t rush them out of childhood.

Unless you are a Social-Justice lemming. Then those things are SECONDARY to REALLY IMPORTANT social engineering experiments. 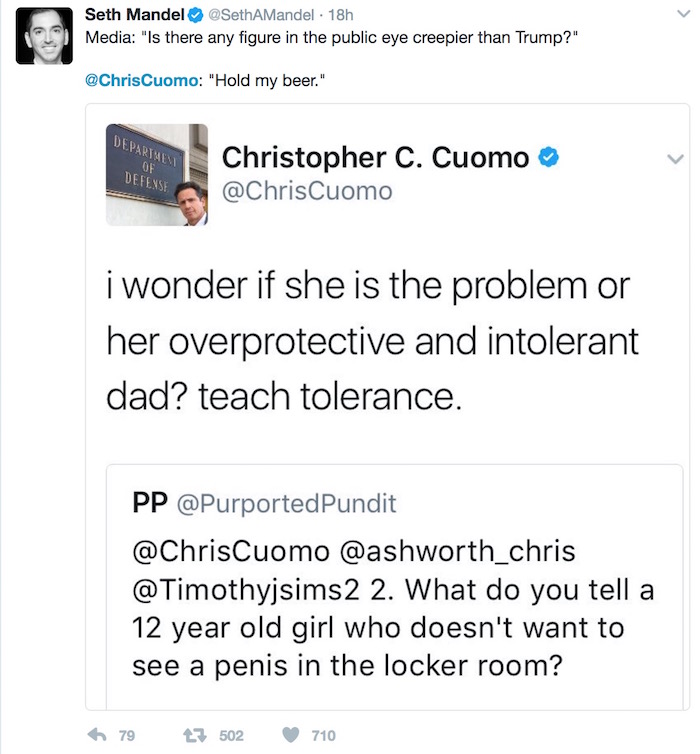 It would be criminal for a stranger in a park to open a trench coat and expose himself to a twelve-year-old girl.

But take that same girl, in the supposed privacy of a ladies’ change room, where she herself may be in an embarrassing state of undress, add some guy who calls himself a lady, and the rules suddenly change.

For that twelve-year-old girl to object to seeing a swinging johnson (of for her parents to object on her behalf) is PROOF that you have a diseased mind, you intolerant bigot!

Question: Why should we have change rooms at all?

By that logic, we should not have a right to be either offended or modest. We might as well all just change in the open, however shy or awkward we might me.

If you tweet him with his Twitter handle @ChrisCuomo you may want to ask him if that speech about intolerance also extends to observant Muslims in their Hijabs who (in some places) do not even permit boys over the age of 8 to ATTEND family swimming in public pools?

Should these Muslim women, who don’t even embrace mixed-sex swimming, permit a naked man — who claims to be a woman — present in their midst as they change in the locker room?

Why or why not?