‘We are treating this as a terrorist incident until we know otherwise.’

Update: (1:45 PM Eastern.)
Photo of attacker now available.
This is what ‘Asian’ looks like in UK reporting:

Draw your own conclusions.

Ten victims were reportedly treated for injuries on the Bridge. One victim (survivor) was rescued from the Thames. At least one victim confirmed… the female police officer who was attacked.

Junior doctor Colleen Anderson from St Thomas’ Hospital confirmed the death of the woman and said a number of other people were hurt – some with “catastrophic” injuries.
She said she also treated a police officer in his 30s with a head injury, who had been taken to King’s College Hospital.
She said the woman had died at the scene.
“There were people across the bridge. There were some with minor injuries, some catastrophic,” she added.
“Some had injuries they could walk away from or who have life-changing injuries. There were maybe a dozen [injured].” —BBC

BBC has exclusive video of an eyewitness describing what he saw.

A man drove ‘a 4X4’ through a crowd in London, stabbed a police officer and was shot by security inside the perimeter of British Parliament. (Parliament was in session at the time.)

A knife-wielding attacker was shot by armed police in the grounds of Parliament today after pedestrians were mowed down on Westminster Bridge.
More than 10 people are said to have been hit by a car on Westminster Bridge after a vehicle described as a ‘4×4’ reportedly drove into pedestrians and cyclists.
A ‘middle-aged Asian’ intruder then managed to break into the grounds of the Houses of Parliament and stabbed a police officer before he was shot, reports suggest.
Three injured people were seen on the floor outside Parliament and the Palace was placed on an immediate lock down. –DailyMail

Asian? Riiiight. DailyMail is going to get angry letters about perpetuating that nasty driving stereotype.

Are we supposed to think he’s Phillipino? Japanese, maybe?

Are we to assume he’s Shinto or Buddhist, too?

Definitely NOT from the NEAR East. No, no, no. Better not report THAT. Keep it safe and throw all of Asia under the bus. 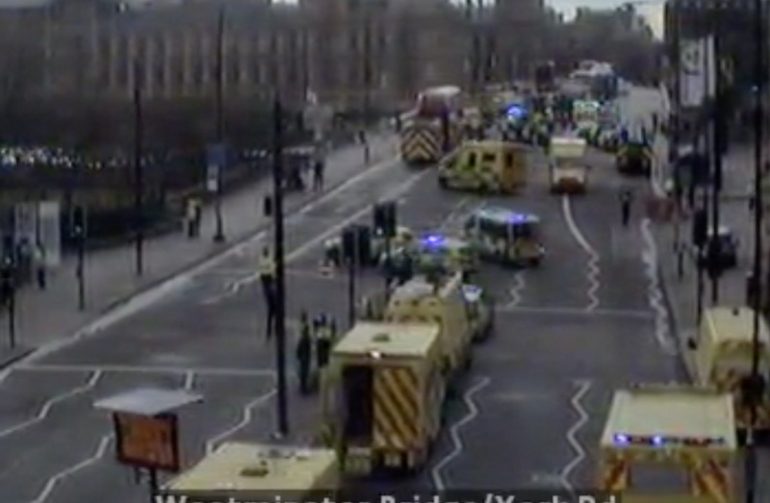 Here is a video clip from moments after the man was shot.

Here’s a shot of the bridge where he drove through the crowd.