This Russian Ambassador is like a political ‘Where’s Waldo’.

While the Democrats are waging a slander war against Jeff Sessions (in Which Obama fired the first shot) we have learned details about one of those ‘meetings with the ambassador’.

Officials from the State Department and Heritage Foundation provided additional clarity Thursday about a July event at the Republican National Convention in Cleveland where then-Sen. Jeff Sessions of Alabama held the first of two conversations with Russian ambassador Sergey Kislyak.

…The Cleveland event, the “Global Partners in Diplomacy” conference, was attended by many foreign ambassadors to the US. A Cleveland Plain Dealer story from July 20 reported 80 ambassadors were invited to the event’s reception, during which Sen. Bob Corker of Tennessee, the chair of the Senate Foreign Relations Committee, gave an address.

As a State Department spokesperson told Business Insider in an email, the State Department has invited foreign ambassadors to both the DNC and RNC “as observers of our democratic process” since the 1980s. The State Department manages invitations, logistics, and security, and ambassadors are responsible for their own expenses, including flight and hotel accommodations. The convention committees develop the programming the ambassadors participate in or attend.

In this case, the Heritage Foundation was one of the organizations that sponsored the Global Partners in Diplomacy conference, the one at which multiple news outlets reported Sessions and Kislyak spoke following an address Sessions gave to attendees. The State Department was unable to confirm which dignitaries were in attendance at both the RNC and corresponding DNC events, or whether Kislyak attended a corresponding DNC event, which would’ve occurred following the initial WikiLeaks dump of hacked Democratic National Committee emails.

A spokesperson for the Heritage Foundation told Business Insider in an email that Sessions provided a keynote address at a defense and national-security luncheon attended by roughly 100 individuals. The spokesperson said, “I believe he was speaking as a senator on Armed Services” during his address, not as a Trump campaign surrogate.

As The Wall Street Journal reported Wednesday, a spokesperson for Sessions said the appearance was in his capacity as a senator and not as a campaign official. The spokesperson added that Sessions was approached following the speech by several ambassadors, including Kislyak, with whom he held a “short and informal” conversation.

But Politico reported Thursday that Sessions was clearly identified as a top Trump adviser for his speech before the dignitaries at the Cleveland convention. — Business Insider

Are connections with Ambassador Sergey Kislyak nefarious? If so, we should pay close attention to who he’s been hobnobbing with. (Besides those Frequent White House visits during POTUS 44’s term.)

The Ambassador showed up at Trump’s speech. You know, the one where the Democrats wore their Klanbake-White outfits.

While Trump invited Ryan Owen’s widow, who sat to Ivanka’s immediate right, Ambassador Kislyak sat beside someone else.

Guess who he sat with? 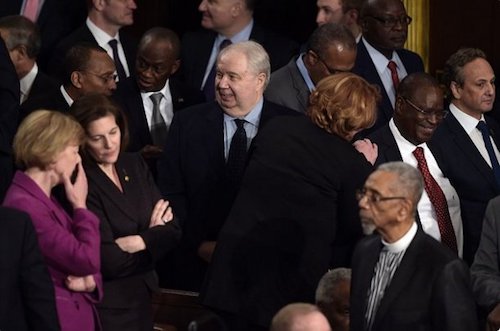 What’s next, photos of Chuck Schumer hanging out with Vladimir Putin? 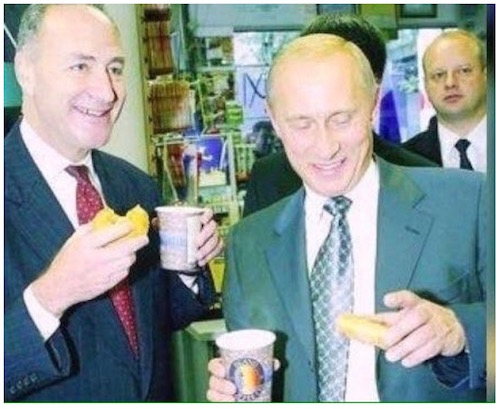 So… exactly HOW seriously should we take these ‘influence’ charges, if the Same ‘corrupt’ Russian Ambassador was sitting with the Democrats for Trump’s Presidential address?