But you can bet they’d suddenly ‘care’ about property rights if anyone stole their iPhone.

These guys might want to pay attention to what is happening to other ‘activists’ who think trashing personal property is a legitimate means of ‘protest’.

We’re not looking at a wink and a slap on the wrist anymore:

But if someone heard they supported this group, got mad, and kicked in their TV, they’d call the cops, right?

But don’t try to apply PRINCIPLES to what they are doing. They are ‘activists’ and don’t care about such trivial things.

The group confirmed that the act was very much intentional.
‘Tearing up the golf course felt justified in many ways,’ one anonymous member of the group told The Washington Post.
‘Repurposing what was once a beautiful stretch of land into a playground for the privileged is an environmental crime in its own right.’
The golf course was formerly farmland, and sits atop cliffs overlooking the Pacific Ocean just south of Los Angeles.

That’s fine, then is it? As long as it ‘felt’ justified?

And the proud vandals even provided video for us.

Funny thing about the logic they use to justify their actions.

That ‘felt justified’ excuse has been used as cover for some of history’s most horrific atrocities. (Even some involving putting people in ovens.)

But if you ‘felt justified’ we should accept you completely BYPASSING our courts and our criminal justice system, and you being a self-appointed Inquisitor for the Progressive movement.

What great work have they accomplished?

How dare Trump build a golf course on that beautiful land.

What was it before?

You guessed it. It was farmland before it was a golf course.

They are pretending to care about pristine land being developed.

“No more Tigers, no more Woods.” 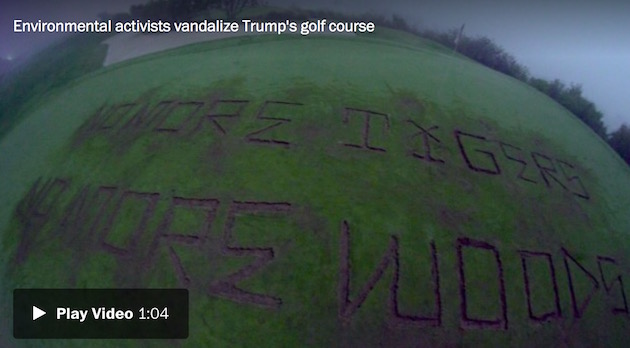 Clever. Except that there were NEITHER on this golf course.

Let’s call this what it REALLY is.

They hate Trump and want some way to strike out at him.

Meanwhile, in the REAL world, a young girl with more courage than the whole group together is standing tall for a cause that matters.

Look at what THIS courageous young woman is doing, and hang your heads in shame.

They aren’t motivated by ‘love’ of the environment. They’re energized by hatred of Trump. Nothing more noble than that.