Is this Art? Or a hate crime? Is there even a distinction anymore?

A painting on display at a University of Alaska Anchorage art gallery, which depicts the severed head of President Donald Trump, is sparking debate about free speech rights and whether the image is appropriate for display, at a public institution.

The artwork, created by Assistant Professor of Painting Thomas Chung, is part of a faculty art exhibition, at the UAA Fine Arts building.

In describing his painting, Chung said, “It’s an image of the actor who plays Captain America, and two eagles are sort of screaming into his ears, and he’s holding the severed head of Trump, and there’s a young Hillary Clinton clinging to his leg. I was reminded of those 80’s rock posters, where there’s a woman in tattered clothes clinging to a strong male hero’s leg.”

Chung says the motivation for the painting was his dismay over the results of the presidential election.

“After Trump was elected, I spent days just weeping. And it was really surprising, because I’m not a political person,” Chung said. “I am a social artist. I deal mostly in ideals of culture and global culture, but this election bled into that.”

The painting has prompted debate on social media and complaints to the university. — KTUU

In a country that has had more than one Presidential assassination attempt, threats of violence against a sitting President are not taken lightly.

Is this just an expression of free speech and disdain for someone he would like to see dead in a ditch? Or is this ‘hate speech’?

The fair question has already been asked. And it’s the right one.

How would people react to this same painting if it were Obama’s head being held aloft? Or Clinton’s? 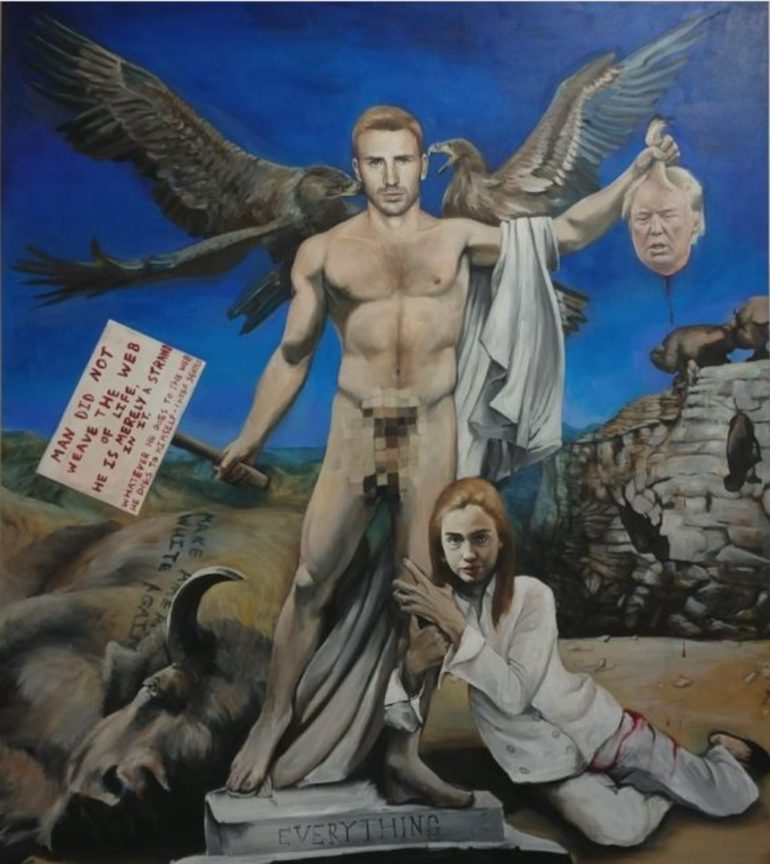 We remember well when EVERY criticism of Obama’s policy or statements were dismissed as ‘racist’. Whatever happened to that robust criticism of anyone who dares speak ill of the President?

The media couldn’t POSSIBLY have been displaying their BIAS now, were they?

You can’t have it both ways, people. So which is it … when you hold ANY President’s head aloft?