Can you imagine what would’ve happened if this had been said about the Democrats? Or Academics?

A professor from the Art Institute of Washington posted an incendiary statement on Facebook that has shocked many.

John Griffin, a Media Arts and Animation professor, called for Republicans in Congress that voted for the American Health Care Act (AHCA) to be ‘lined up and shot’. He even clarified that it wasn’t hyperbole because ‘blood is on their hands’. 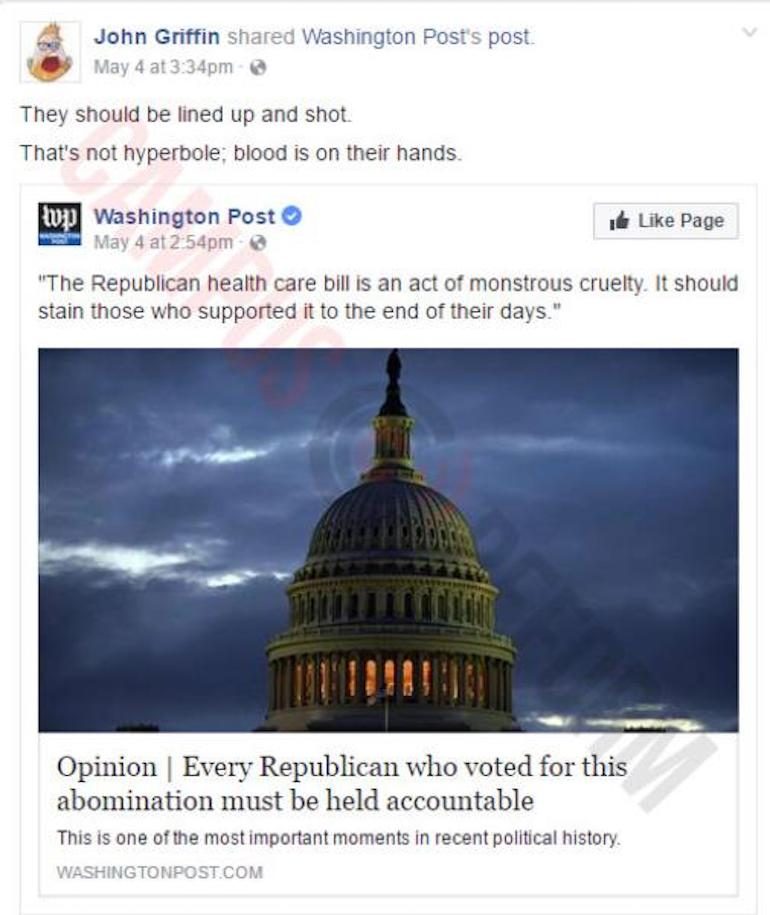 A couple of minutes later, he didn’t hold back how he felt about Republicans and those that vote for them:

So, is ‘monstrous and ignorant’ an upgrade or a downgrade from ‘basket of deplorables’?

He later posted an ‘apology’ with a giant BUT:

It’s been pointed out to me that language I had used in reference to the House of Representatives was inappropriate, especially from someone of my profession.

This is true. It is inappropriate. And I apologize for using them. But it also speaks to the fear so many feel right now in this country.

I have a pre-existing condition. One that, without the proper treatment, will eventually kill me. The feeling of helplessness and fear that came from watching Congress’ treatment of Americans in situations like mine, and worse, led to my lashing out on social media in a way that was rash, untoward, and anathema to the way I wish to conduct myself.

I regret my words. I regret the fear that stoked them.

I will continue to fight for what I think is just; but not with such thoughtless rhetoric, words have meaning. I ask for your forgiveness.

Campus Reform attempted to contact Griffin and the Art Institute of Washington for comment, but the requests were unanswered.

Lined up and shot. Like the Soviets did to the dissenting parties when they took power. How ‘Democratic’ and ‘liberal’ of him. Considering how much of the violence and mischief, the mobs, rioting, assaults and firebombings can be traced back to ‘institutions of higher learning’ one could make the case that the REAL corrosive influence on law, order, and peaceful society is academia itself. Should THEY be lined up and shot?

Of course not. Because we on the right do NOT share academia’s fascistic instincts for suppressing dissenting ideas. (We might want to re-consider which schools we provide government-backed student loans to support, though, if they have such disregard for the rule of law.)

Of course, his rhetoric will get a pass.

Just like all the calls for President Trump’s assassination:

The Media (D) has a double standard and they aren’t even ashamed about it.

The selective reporting of stories is just as much ‘Fake News’ as pushing stories that aren’t true.