The Social Engineers in their ivory towers had their chance at solving this problem, and it only got worse. Is it time for a more ‘common sense’ solution?

Sometimes it takes a blue-collar deplorable to get to the heart of the issue.

Most of us are too young to remember it, but any student of history can figure out that we’ve seen this show before. The names have changed, the ideology is different, but the problem is fundamentally unchanged.

Bad men want to kill us and they don’t mind throwing away their own lives to accomplish that goal.

We don’t need to psychoanalyze them. They don’t need a hug. We don’t ‘deserve it’ for some past geopolitical grudge they have against us.

The solution is far more straightforward than that, in the words of a WWII veteran: 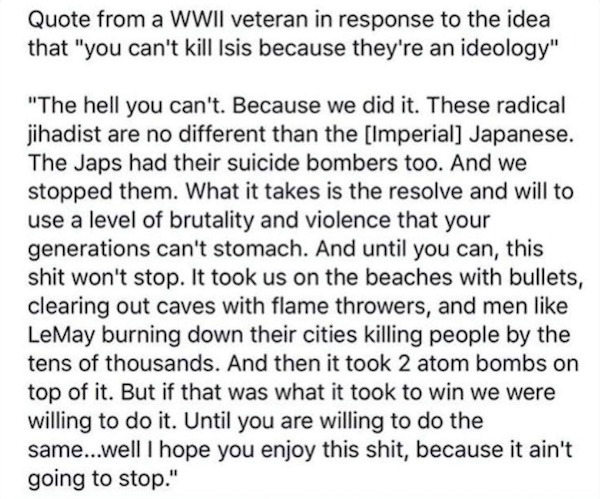 There is a REASON the world took notice when we threw a MOAB at the problem. It’s because that was the correct solution.

Especially when you add what Trump had sense enough to add — kill their motivation to join.

He is properly stigmatizing them as losers. And even their hope of glory in the eyes of their peers, or in the afterlife needs to be targeted.

They are losers with no future now, nor in eternity. Hopeless, helpless, hapless and weak. They are pathetic figures worthy of contempt.

They are contemptible slugs who are ONLY as dangerous as the tools that they find in their possession. Like this dumb dog who ‘fetched’ the fireworks.

What kind of contemptible loser has to pick a fight with a girl even too young for Mohammed to marry.