What happens when the guy that was one of the major factors in the Hillary Clinton Election Loss Blame Game gets fired?

For Liberals, it’s a conundrum wrapped up in an enigma.

Are you happy that the guy that cost Hillary the election was sacked?

Or are you angry because President Trump did the sacking?

Liberals are now just hapangry and don’t know how to deal with it.

Everybody is so confused about this.

Colbert seemed rather shocked when his audience cheered and applauded the breaking news of the firing of James Comey.

Don’t worry, he sets them straight about how they should feel.

But that’s not the only fascinating reaction.

There was a FULL BLOWN MELTDOWN by the Celebrities on Twitter.

Are you getting tired of outraged Celebrities?

This is crap is hilarious!

Perhaps they should consider not acting and instead go into political commentary.

Life comes at you fast pic.twitter.com/uNYu0EiYKA

TRUMP SAYS 1 OF THE REASONS HE FIRED FBI DIRECTOR COMEY IS
BECAUSE OF WHAT HE DID 2
HILLARY CLINTON.GOD,HE IS A
A GUTLESS,LYING,TRAITOR ‼️

No spin matters- keep it simple -trump just fired the guy investigating him. Facts so inconvenient i know.
We must Impeach this clown NOW

Sorry, John. The President is allowed to fire the Director of the FBI.

We don’t need a special prosecutor. We need an Auror. @jk_rowling

COMEY FIRED! Dirty, corrupt things afoot. The truth will all come out. The unraveling continues… Hold the election over. Dirty. Corrupt.

Trump might just as well have said: “Lock me up” Last gasp of a dying man. GOP stop being unpatriotic pussies. #SpecialProsecutor

And to any of you who are okay with this, please let me know how cool you’d be if Hillary were President & did this as he investigated her.

Orange Shady is gonna make sure we never get to the bottom of this madness! “Nixon The Sequel”. Remember the firing of Archibald Cox?! Hmmmm https://t.co/8AjXBwKCkB

Don Cheadle is the only one saying that Comey actually deserved it… then the tinfoil hat comes out:

I do. And he’s not totally wrong. Comey has been a hot mess. But as Lao Tzu said, In Action Watch The Timing. It’s suspect af. #resist https://t.co/iwEu6AOni4

It’s your move, @GOP. Who will step up and be the hero?

Welp Comey is gone good thing the entire rest of the FBI isn’t suspicious of Trump nope looks like the whole thing has blown over now. ?

And as usual, George Takei doesn’t blow the whole thing out of proportion:

When the President fires the man investigating him, and Congress and the Justice Dept won’t act, we have a full blown constitutional crisis. 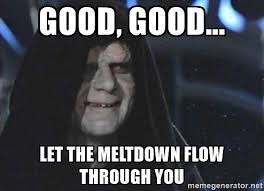 What do the Celebrities that have vocally outed themselves as part of ‘The Resistance’ have to say?

#COMEY This is absolutely OUTRAGEOUS!!! The Head of an IMPARTIAL agcy was FIRED bc he was uncovering corruption in the WH! #?????????

Donald Trump definitely has syphillis!! Who would act like this? Nixon must have had syphillis too! @MitchMcConnell you better wake up

It’s obvious that the Hollywood elites haven’t read this book, but you should: