Do you LOVE that President Trump is trolling Chuck Schumer on Twitter? 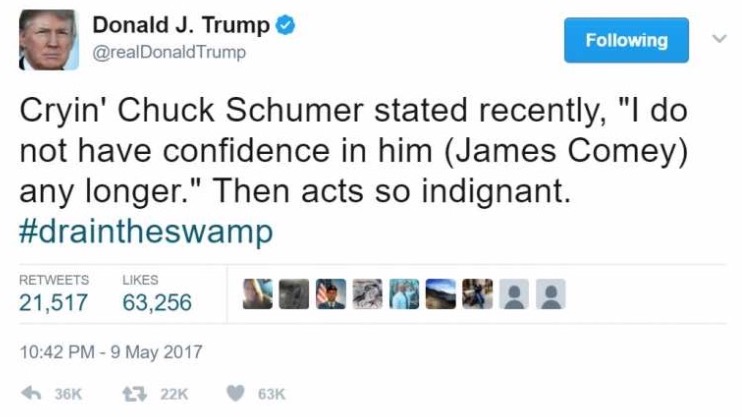 Look at what Cryin’ Chuck had to say yesterday:

Trump’s firing of Comey was a “big mistake,” said Schumer afterwards, hyping the innuendo-laden and evidence-free narrative of 2016’s president election being compromised by a conspiracy of subversion executed by Trump’s political team and the Russian government.

“Why now?” asked Schumer of Comey’s removal, casting Trump as either complicit with or compromised by the Russian state. “Were these investigations getting too close to home for the president?”
Read more: Daily Wire

But contrast that to what Cryin’ Chuck said just days before the Election:

“I do not have confidence in him any longer,” said the New York Democrat, who has criticized as “appalling” Comey’s decision to send a letter to lawmakers 11 days before the election disclosing the bureau’s new review of e-mails potentially pertinent to the investigation of Clinton’s private server.

“To restore my faith, I am going to have to sit down and talk to him and get an explanation for why he did this,” Schumer said in an interview…

…Schumer’s rebuke comes as Democrats have piled pressure on Comey, saying he violated long-established guidelines against public pronouncements about investigations near an election. Only one Democrat, Representative Steve Cohen of Tennessee, has specifically called for Comey’s resignation.

Yeah.
It’s ok, Cryin’ Chuck isn’t the only one confused about how to react to the firing of James Comey.

Back in January, Chuck Schumer had brought out a Muslim family to use as live props for his denunciation of President Trump’s Executive Order that temporarily banned travel to 7 countries that are high-risk for terror. During the press conference, Chuckie got a wee bit choked up and was weepy.

Because, as a Democrat and Jewish elected official, it’s his job to make sure that all the folks determined to ‘push Israel into the sea’ come to America and spread their hatred from sea to shining sea.

You can watch Cryin’ Chuck here: 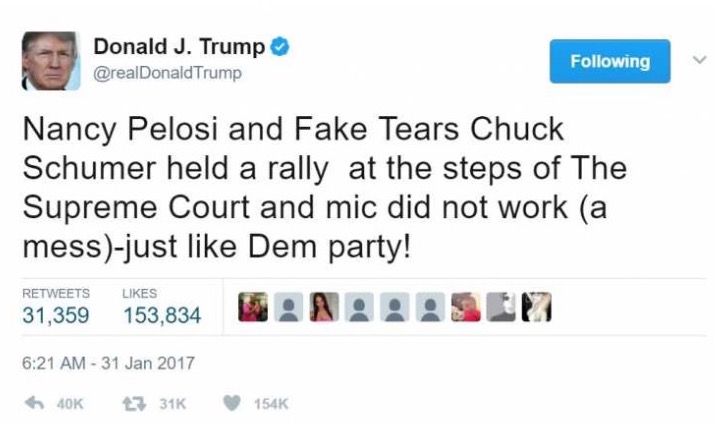