Barry got a ‘Courage’ Award? Isn’t that what they give to unattractive, overweight girls when they pose nude?

He really did get the award, though.

In selecting the former president for the award, the John F. Kennedy Library Foundation lauded Obama for expanding health security to millions of Americans, which opponents of the bill passed by the House on Thursday argued could be lost if it becomes law. The bill faces an uncertain future in the Senate.

‘President Kennedy called on a new generation of Americans to give their talents to the service of the country,’ said Caroline Kennedy, the late president’s daughter, in announcing the award in March. ‘With exceptional dignity and courage, President Obama has carried that torch into our time, providing young people of all backgrounds with an example they can emulate in their own lives.’…

…The annual award is named for JFK’s 1957 Pulitzer Prize-winning book Profiles in Courage and is presented to political figures who have taken courageous stances in public life.

Let me guess, Hillary’s next in line for losing with ‘Courage’?

Former president Barack Obama has vigorously defended Obamacare as he called on members of Congress to show courage in the debate over the future of health care in America.

Obama was careful not to mention Donald Trump by name in Boston on Sunday night as he referenced the current administration’s efforts to dismantle much of his signature health care law.

‘I hope that current members of Congress recognize it takes little courage to aid those who are already powerful, already comfortable, already influential – but it takes great courage to champion the vulnerable and the sick and the infirm,’ Obama said as he accepted the JFK Profile in Courage Award.

‘I hope they understand that courage means not simply doing what’s politically expedient, but doing what, deep in our hearts, we know is right.’
Read more: Daily Mail

And why would he mention Obamacare?

Because that’s literally the only thing he accomplished in 8 years.

And now it’s being dismantled.

Here at ClashDaily, we can come up with DOZENS of more appropriate awards for Barry…

Nobel WAR Prize — for being the first President to spend every single day of his two terms at war.

Empty Chair Award — there was no ‘there’ there. He was all sizzle and no substance. (Thank God.)

The 11th-Hour Red-Tape Award — for implementing massive regulations after the election and before the Inauguration of President Trump.

The Unpublished Editor Award — for being the first black editor of the Harvard Law Review, but had no work of his own published

The ‘I Ate A Dog’ Award — participation tropy

Best J.V. Coach Award — for his founding of ISIS by leaving a vacuum of power in the Middle East

Most Partisan Justice Department Award — for failing to do anything about Crooked Hillary and targeting journalists and political opponents.

The Malcolm X Award aka Most Improved Incitement of Racial Tensions Award — for reigniting vitriolic race relations in a ‘postracial era’.

The ‘Flip The Bird’ To Religious Liberty Award — for picking fights with religious liberty in general (see: forcing Nuns to pay for birth control; the German Homeschooling family seeking asylum that he denied; Christian Bakery)

Most Weaponized Federal Government Award — for using the government as a tool to punish his political enemies (eg. IRS and Tea Party Groups)

Most Eloquent Stutter Award — for the ‘eloquent’ speaker that just can’t get those words out.

Most Ironic Administration Award — the scandal-plagued ‘scandal-free’ administration; and a biracial president that denied his white heritage for his entire presidency; greater racial tensions after touting a ‘post-racial’ era.

And that all culminates into the final award for this evening:

Actually, time and space prevent us from continuing because we’ve got more:

Most Guns Sales by Gun-Grabbing President

Most Food Stamps Issued In One Administration

Now, we know you’ve got some ideas.

Interestingly enough, the identical trophy is given for all of the above awards.

And heck, just ’cause Barry’s just such a swell guy. 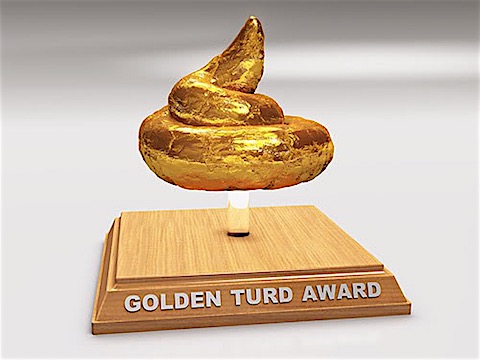