Why can’t it be both?

Rep. Waters has called for his impeachment for MONTHS — and has denied it. She’s shrieking about impeachment again… or is that still? 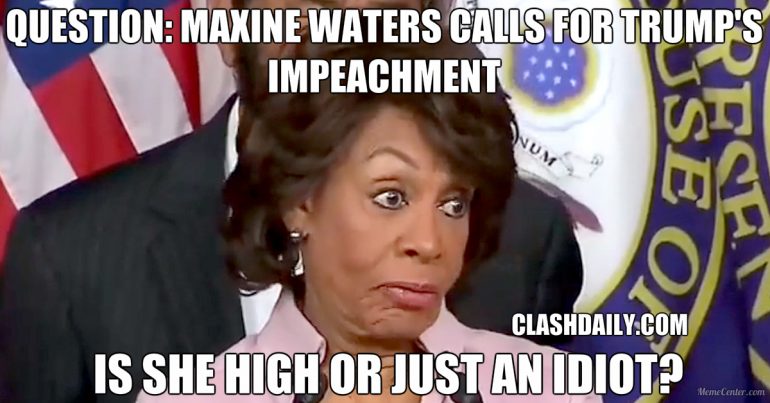 QUESTION: Maxine Waters Calls For Trump's Impeachment - Is She HIGH Or Just An Idiot?

From Rolling Stone magazine, no less:

Democrats can’t just be against Trump, the pundits have said since Hillary Clinton lost in November – they need to be for something. The Center for American Progress’ underwhelmingly named Ideas Conference in Washington, D.C., on Tuesday was supposed to showcase the ideas of some of the prospective candidates for the party’s 2020 nomination: Kamala Harris on criminal justice reform, Kirsten Gillibrand on paid family leave and Elizabeth Warren on rooting out corruption in Washington.

Democratic Rep. Maxine Waters has a lot of ideas about financial reform – she wants to protect Dodd-Frank and the Consumer Financial Protection Bureau, both of which Trump has proposed gutting, and defeat the odious CHOICE Act (“We call it the Bad CHOICE Act!”). But the idea that she’s most passionate about is that of pushing Donald Trump out of office as soon as possible.

And for all the punditry to the contrary, that’s the idea that seems to most animate the progressives who’ve gathered in the windowless hotel ballroom where the Ideas Conference is taking place. Waters receives one of the conference’s most raucous receptions as she delivers the blistering indictment of Trump she’s become known for since the president’s inauguration – which she skipped. No one has sounded the alarm louder or more consistently since.

This is the Democrat hero?

The one who thought Russia ‘continues to advance’ into Korea?

The one who was opposing the Electoral College count as former VP Joe Biden was ratifying the results of the election?

Rep. Waters is calling for other Democrats to use ‘stronger language’ like she does.

First, there was the call for Impeachment on Hardball with Chris Matthews on January 17 before the Inauguration:

And it just kept going — one week in, two weeks in, a month in, several times a day.

For your convenience, here is a montage of many of the calls for Impeachment by Rep. Waters with a fantastic soundtrack:

Even Politifact said that her statement was ‘Pants on Fire’ lying:

Of course, that montage video was from mid-April, so it’s not complete:

The Daily Caller has put out a fantastic video indicating that the Democrats don’t need to look any further for their next Presidential Candidate:

You’ve put all your faith in this pile of crazy.

Maybe you should’ve read this:

Your Standard Of Living Is Being Systematically And Deliberately Destroyed
May 17th, 2022 Conservative Firing Line