That wouldn’t happen with a DEMOCRAT, would it? Look at how well President Clinton was liked by women… Oh, right. Bad example.

Who could it be?

Well, it wouldn’t be an outspoken far-Leftist blowhard, would it?

Of course, it is!

Here is a photo of de Blasio championing one of those progressive bathroom bils. Look how thrilled the women around him are to have men taking dumps in the bathrooms and hanging out in the changerooms with them. 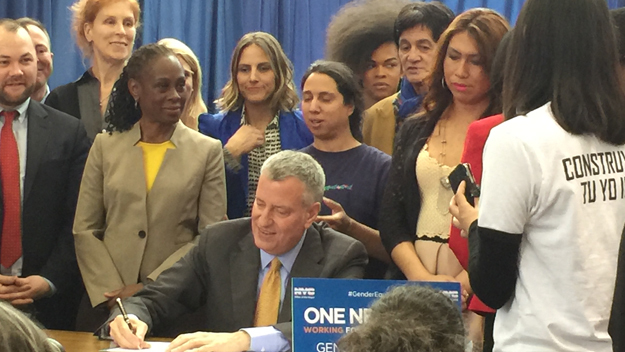 Where men are women and treated with the special status that women get due to their gender identity, because ‘gender is a social construct’ so men can be women.

But it turns out that this ‘champion of women’ isn’t so friendly to women in the office.

The weird thing is — the number of women that were leaving in such a short period of time that The New York Times even noticed.

What’s more, the newspaper that recently changed their slogan to: ‘The truth is more important now than ever‘ from ‘All the News That’s Fit to Print — But Some Of It We Just Made Up‘, decided to actually look into why the women were fleeing the de Blasio office like rats on a sinking ship.

Here’s what they found:

[H]e often lectures his staff during meetings in what people describe as a condescending tone, and he is known for berating or belittling subordinates in front of others or shooting off emails criticizing them in brusque terms. …

But some found the work environment at City Hall directly hostile to women.

“I just found it to be a totally inhospitable workplace,” said Lindsay Scola, Mr. de Blasio’s former scheduler, who had previously worked with the former first lady, Michelle Obama, and the Energy Department.

Ms. Scola and two other women recounted repeated instances where they felt they were marginalized or talked down to by a male colleague, because they were women. Ms. Scola said she was once told that her “job was to hold time on the Outlook calendar and nothing else, like I was a little girl.”

Ms. Scola said that the mayor was aware of the behavior and “knowingly tolerated it.”
Read more: New York Times

Look at that. Character matters.

And it’s revealed in your everyday life, not just in stumping speeches.

So, men that are making workplaces hostile for women are a problem?

Wow. Somebody should tell the staunch feminist, Bill de Blasio.

Men who don’t like women taking up space are exactly why we need the Fearless Girl. https://t.co/D2OZl4ituJ