How DARE they say that! (Even if it’s technically accurate.)
They got worked up over cartoon, they REALLY aren’t happy about this.

Is it upsetting to say he married a 6-year-old girl?

Because Mohammad did. Although he may have waited until after her 9th birthday before consummating his marriage. She was reportedly his favorite after his first wife had died.

Is it offensive to call him a slave owner and dealer? We have reported on Islamic SCHOLARS explaining that it’s ‘virtuous’ to do so even now. This (female) scholar is not speaking merely of slave labor, but explicitly sexual slavery.

Not only is this Professor defending this practice as ‘lawful’, she is saying that HER religion (have you guessed which one yet?) has IMPROVED general society by establishing specific rules about who may (and who may not) be captured and used as sex slaves. —
More

What about the 600 victims beheaded? The event in question is called Banu Qurayza.

Here is the photo: 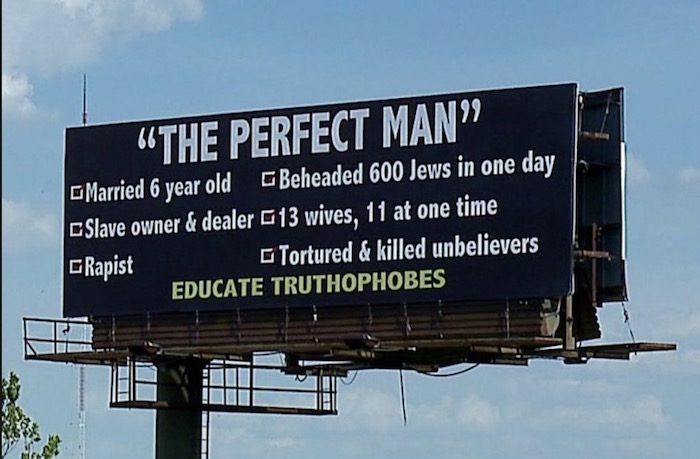 Why should we care?

Because if Mohammad was — as they believe — the ‘perfect man’, that has consequences.

If Mohammad was ‘perfect’ then his behavior is flawless and cannot be called ‘wrong’ (Even if that behavior is explicitly illegal in our country.)

Others will live by, and follow his personal moral example.

See how this can become a local problem?

Does this billboard offend you?