He’s got 260 acres. And he has filled it with some Serious hardware. Including a tank. And he is open to visitors.

That is one Badass collection!

It’s not just a museum, either. It’s a range, too.

A gun collector known as the Dragon Man boasts himself as the most armed man in America.
Mel Bernstein, 71, has more than 200 machine guns, 80 military vehicles and countless grenade launchers to his name.
In fact, Bernstein, originally from Brooklyn, New York, is so obsessed with guns that his bedroom has hundreds of firearms hung up on the wall – a situation that makes him feel ‘comfortable’.

And it’s earned Bernstein quite the reputation. Hundreds of weekend visitors come to shoot firearms at his range or to visit his military museum.

You want to see some pictures, right? Sure, we can do that. But stick around for the video. ClashDaily dug up an interview where someone brought a camera in, and got to interview Dragonman himself and get a little bit of a tour. (A complete tour is here.)

(It shows his hilarious driveway, with its shot-up wrecks of cars and mannequins, and painted warnings not to enter after dark. Signs like ‘registered Democrat’ or ‘played his rap music too loud’.)

Here are the pics we promised: 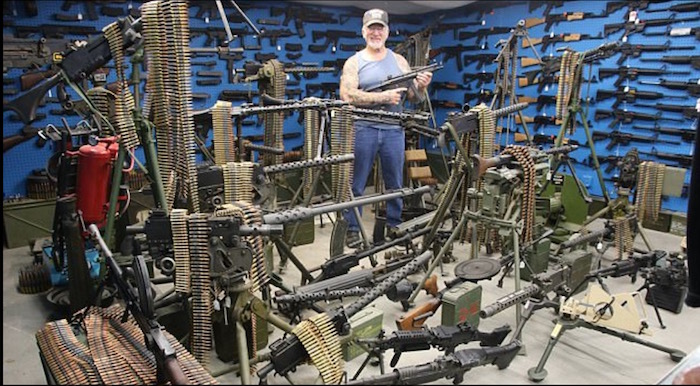 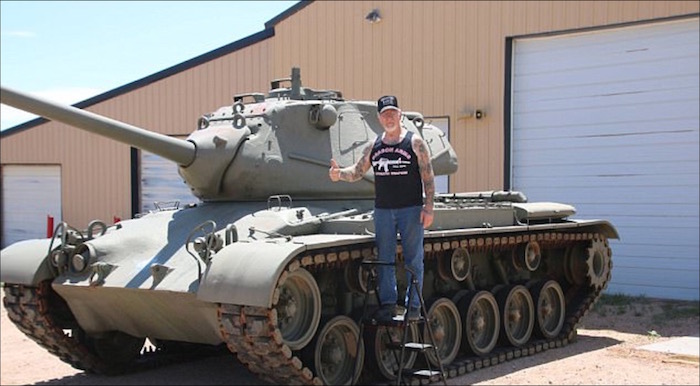 One of the half-tracks he’s talking about that he says are so fun to drive: 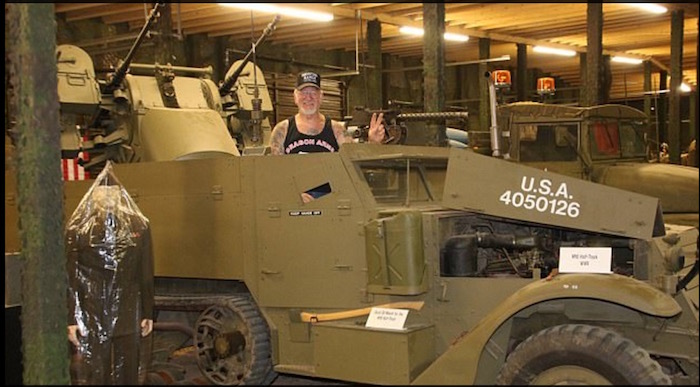 It takes two hours to go through the huge complex, according to the Colorado Gazette, which houses a collection worth upwards of $10million, with memorabilia ranging from World War I to Vietnam.
Bernstein’s gun collection alone, he estimates, is worth around $8million.
There’s also an authentically reimagined World War II bunker, which shows off bullet-riddled pots and pans and uniformed mannequins stationed at anti-aircraft bazookas. — DailyMail

He’s not just about military hardware, either, check out his Facebook page, and you’ll see his Hotrods, too!

(He was VERY happy to tell us he’s got more followers than Obama.)