Is Love still a ‘strong independent woman’ if she breaks ranks with official Feminism?

The grunge rocker and actress has always been pretty badass. But she’s taken her badassery to the Twitter page of none other than Sharia-loving Women’s March ‘leader’ Linda Sarsour.

Love called Muslim activist and ‘Feminist’ Sarsour a ‘fraud’ and a ‘vile disgrace to women and all mankind’.

Insults were flying and retweets of supporters…

You're a vile disgrace to women and all mankind @lsarsour

Well that's a shame, count me out of anything else related to her. Shes a fraud

I feel there's zero sincerity in her actions you claim. https://t.co/JTvB29FxTP

So Courtney posts a right wing article to make no point. https://t.co/upEwgLneX6

Linda is always selectively outraged at crimes against non-whites vs. those crimes by Muslim terrorists…thus, she has ZERO CREDIBILITY.

Update: @Courtney is denying that Rahma Warsame was brutally assaulted in Columbus, OH. She's using her platform to say it was FAKE story. pic.twitter.com/JOokj4N1Ff

Thanks @Courtney for clarifying what side u are on. Not the side of justice or u would be demanding accountability 4 brutal assault of Rahma

Dissent is the highest form of patriotism. I will keep speaking truth to power. You aren't the only one who won't like it. https://t.co/TfryJ0c5UI

Thank God I never knew who @Courtney was before today and that was a great thing.

@Courtney I explored how Sarsour cynically exploited vandalism of Jewish cemeteries in this @NRO article. https://t.co/mc4IBwcqvC

Welcome to America where a white woman "celebrity" uses her platform to deny that a Black immigrant Muslim woman was brutally assaulted.

Where people of color and Muslims must prove their humanity in order for them to be seen as a victim of a brutal crime.

But it was Courtney that had the slamdunk:

unfollowed. I won't follow anything thats being led by an anti-Semetic terrorist that's using feminism as a tool to promote her radicalism

Sarsour has defended Saudi Arabia’s oppression of women because they get 10 weeks paid maternity leave.

10 weeks of PAID maternity leave in Saudi Arabia. Yes PAID. And ur worrying about women driving. Puts us to shame. http://t.co/xZAwgg6HXL

Sure, they can’t drive cars, have a bank account, make their own medical decisions, or even stand in line with men, but paid maternity leave… #priorities.

She also said that she didn’t think Brigitte Gabriel or Ayaan Hirsi Ali ‘deserved to be women’ and wished she could ‘take their vaginas away’. 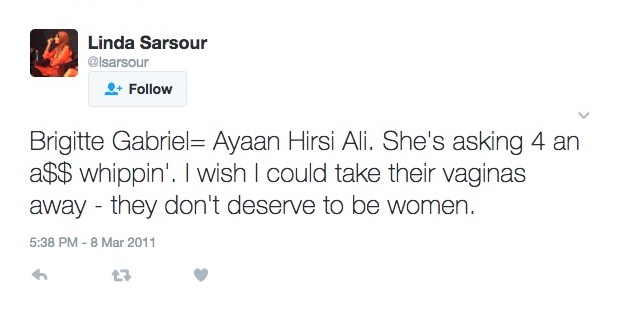 For not promoting hijab-wearing, honor killing, Female Genital Mutilation, and Sharia, I guess.

Oh, and she’s suggested that children in ‘Palestine’ throwing rocks at Israelis is ‘courage’.

The definition of courage. #Palestine pic.twitter.com/VchvSQMGCi

Linda Sarsour must’ve forgotten that this post was pinned to her wall:

"We can disagree & still love each other, unless your disagreement is rooted in my oppression & denial of my humanity and right to exist."

What a hypocritical idiot.

It’s a great thing that Love has called out Sarsour for her anti-Americanism and anti-Semitism.

Of course, Sarsour would attack right back the only way Leftists do… with shrieks of racism.

But if Courtney keeps pushing, maybe Linda will let her guard down.

Here’s a gif for your next tweet to Courtney: