Look at that! Michael Moore found a NEW way to undermine America!

This time his target is the administration of President Donald J. Trump.

The liberal filmmaker, is currently working on another ‘documentary’ called ‘Farenheit 11/9’ about the 2016 election.

He’s also starting a website called ‘TrumpiLeaks’ that will allow ‘whistleblowers’ to send incriminating information about the President.

Like that blistering CNN report that he gets 2 scoops of ice cream and everyone else gets one.

(You know that will get Moore’s panties in a bunch!)

Liberal filmmaker Michael Moore announced he is launching a new website, “Trumpileaks,” to encourage whistleblowers to come out with incriminating information about President Donald Trump.

“Trump thinks he’s above the law,” Moore wrote in an open letter heralding the launch of the site.

In the name of patriotism, Moore called on Americans “with knowledge of crimes, breaches of public trust and misconduct committed by Donald J. Trump and his associates” to blow the whistle and save the United States from “tyranny.” 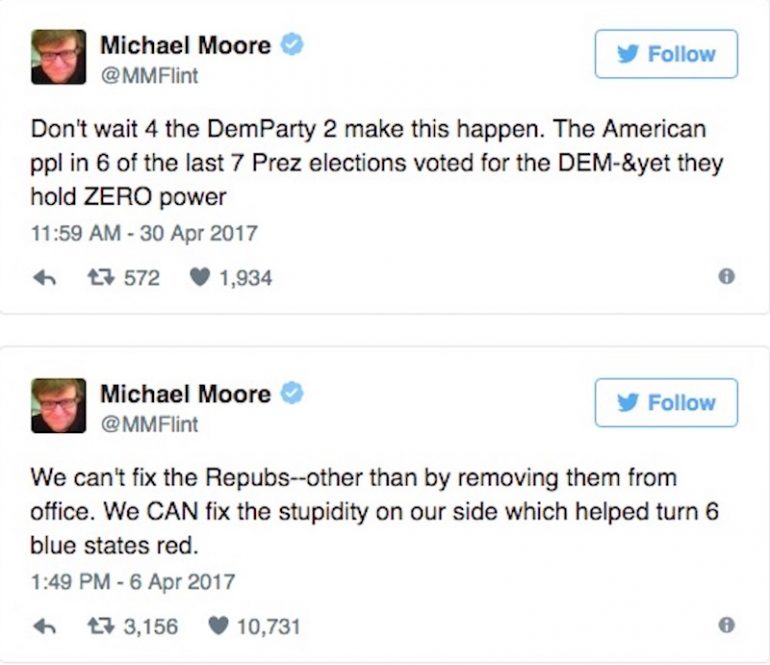 …Moore said whistleblowing is an American tradition that is alive and healthy despite attempts to stifle it.

“Too much is at stake to play it safe. And along with the Founding Fathers, I’ve got your back,” Moore concluded.
Read more: Fox News Insider

The leaks are illegal and hugely problematic.

They raise serious questions about who is really in charge.

‘We the people’ voted, and under our system, the President was fairly elected.

But we now have a group of employees angry with the election result that happen to work with sensitive info and can sabotage the President.

Michael Moore has now set up a format for ‘leaks’ to be published and keep the identity of the leaker hidden.

This comes just after the FBI arrested Reality Leigh Winner for releasing classified information to a news agency relating to a Russian cyber attack.

This is EXACTLY was what Barry was hoping for in those final days when he allowed raw intelligence material to be shared amongst many security agencies.

Michael Moore idiot of the Left is just following lockstep.

Thanks, you big fat ball of hate.

Imagine if a Republican did this to a Democrat President.

But that wouldn’t happen because Republicans have morals.