One doctor who did non-surgical augmentation on over 100 men from Australia has weighed in.

And you REALLY might want to skip that ‘discreet trip’ to Tijuana… Becuase it can go IRREVERSIBLY wrong.

It’s a topic that can make an awkward silence fall on a lot of guys.

It’s not just chicks that feel social pressure about having the right look, or being ‘adequate’.

For some guys, wondering whether he’s ‘man enough’ can cause a number of problems stemming from insecurity.

And just like some women get implants, some guys are now getting injectables.

There are two reasons that’s a bad idea.

For one: they can go horribly wrong.

‘We wanted it to be safe. Various permanent fillers are used in Mexico and Korea and some guys are fine, but we can also see these terrible results as well with lots of lumps and bumps and when it’s permanent there’s not much you can do,’ he said.

For another, a lot of his male patients, aren’t actually as ‘small’ as they think they are. Is it even worth the trouble?

Keep in mind, the temporary procedure only lasts two years. And the price (besides the cost of travel to Australia) ranges from $1500 to $6100 USD.

Don’t forget to multiply that cost by however many times you expect to repeat the procedure. Will the dude be likely to go back to his original size after having been ‘augmented’? Knowing the power of ego … probably not. 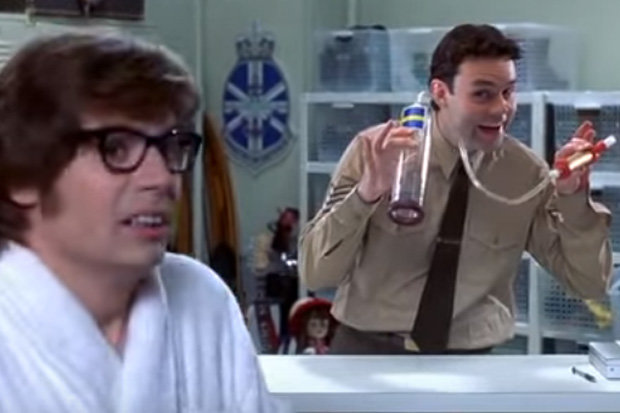 Some of his patients are actually above average in size. And they STILL feel the need to get the injection.

He said most of his patients have what is considered an average sized penis.
‘We’ve had some guys who have a slightly smaller penis but the vast majority are entirely average standard. A few are already big guys who just want to be bigger.’
‘No such thing as too much of a good thing in this area.’
Clinical Psychologist Dr Gemma Sharp, who works with Dr Oates in assessing patients’ needs, told Daily Mail Australia a desire to increase their partner’s sexual satisfaction is another motivating factor for men.
‘It ties in to sexual prowess and masculinity,’ she said. –read more

If you’re willing to pay thousands of dollars every couple of years just to feel ‘man enough’ you’re probably working with a flawed idea of ‘manhood’.

Save yourself some cash, and read this first.