If it helps the greater cause, then a few dead people are worth it? Do you suppose she felt the same way about AIDS?

Of course not. That’s inhuman.

And so is her statement about killing ‘Old-Ass Conservitive White men’.

The ‘comic’ — Marcella Arguello — is one of the writers for Bill Nye the Pseudo-Science guy’s new show. (We’ve discussed that on ClashDaily before.) If this piece of work is a writer there, no WONDER it’s so ‘classy’.

Yes, I deleted an "offensive tweet." Cause if the president can do it then fuck it bitch so can I.

But it was NOT deleted before sites like Twitchy made it public: 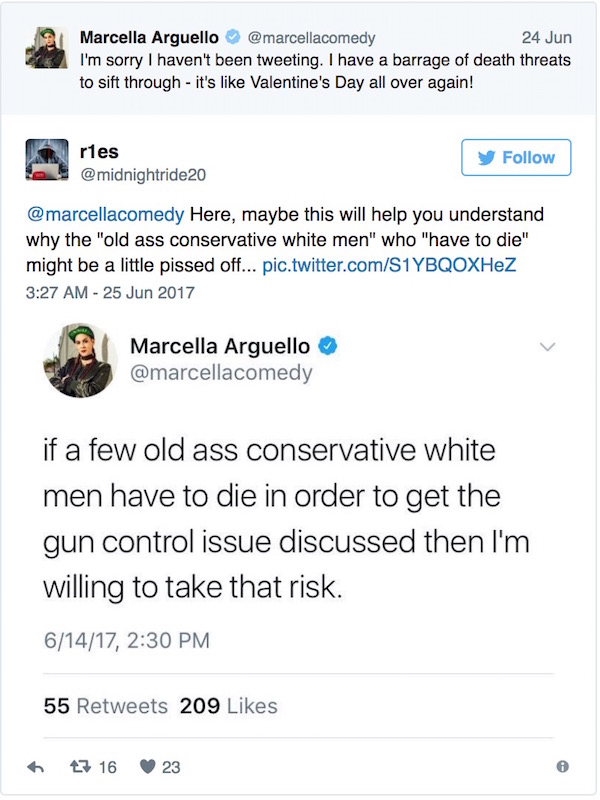 Whatever happened to ‘ageism’ being a bad thing? Nevermind. Hate is ok if it’s directed at someone white. Right?

Criticism came at her from a variety of angles.

Some pointed to the cop that took a bullet putting the Radicalized Bernie Bro down like the rabid dog he was. She happened to be a hero, besides being black and a lesbian — and asked if HER life and suffering were important.

Others pointed to Arguello’s own rage-y tweet and said that ideological hate like this — and the people like Hodgkinson who ACT on it — are exactly the argument in FAVOR of CCW laws.

Probably the funniest one was this quip:

Bunch of "old ass conservative white" WOMEN out here. Come and take it

Either way, judging by her sulking, she was hoping to get more praise and less criticism for her cheap shot.