Aside from learning that Comey is little different than Reality Leigh Winner, we also learned something else about the man that once led the world’s preeminent law enforcement agency. To paraphrase James Comey’s own words, “I was a little bitch so I couldn’t do anything.”

That after all is what he meant when he admitted he hadn’t been strong enough, and that he wilted like a lily when Loretta Lynch told him not to call the Hillary investigation an investigation. Or when Donald Trump said “boo” and scared him out from camouflaged hiding in the drapes. The most Reality Leigh Comey could do was run and hide in his official vehicle and write a memo about it. And then hand it off to a Columbia University law professor who would hand it off to the media.

Because when you’re Reality Leigh Comey, a little bitch that can’t do anything, you can’t even leak information without hiding behind somebody else. 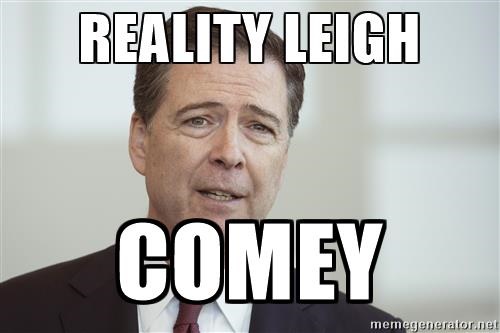