Those Sharia ‘husbands may beat her lightly’ advocates have a lot to answer for, like this poor woman’s injuries.

He beat her with a hockey stick for thirty minutes. And the ‘Syrian Refugee’ claimed he didn’t realize that was a problem in this country!

Here’s an image of the original local newspaper: 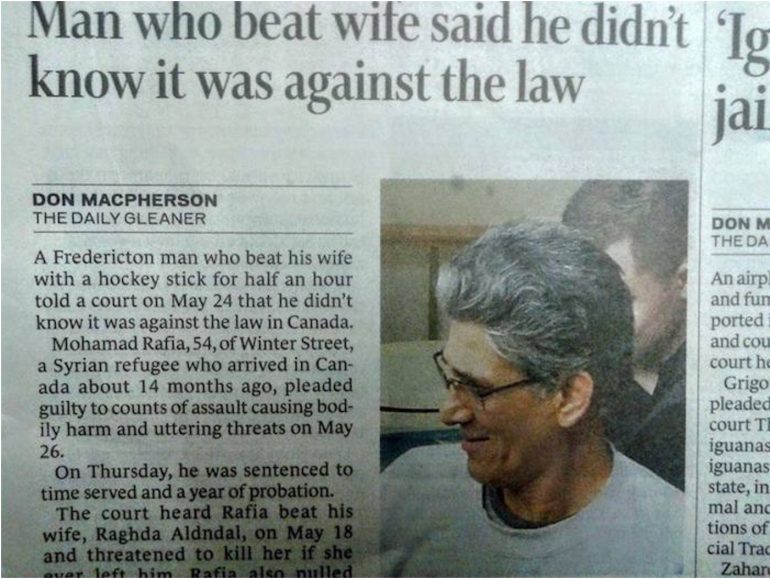 The original source is behind a paywall if you’d like to see it, but the story details themselves are filtering out. Those details are chilling, and exactly the sort of things that Liberals refuse to discuss, for fear of being named ‘Islamophobic’.

As you read this, keep in mind the husband’s name is Mohammad (what else?) and his wife’s name is Aldndal.

The Telegraph Journal reports that after confessing to beating his wife with a hockey stick for at least half an hour, Rafia shamelessly told the court that he isn’t guilty of any crime because he “was not aware of the law” or that it forbade wife beating.

“He’s saying that he was not aware of the law and he was coming from a background where the laws are completely different,” interpreter Abdelhaq Hamza said for Rafia during a May 24 bail hearing.

“Why didn’t they explain the law when we first came?” Rafia said.

…Perhaps the most disturbing detail of the case is that Aldndal not only defended her husband but wife beating as well. She told officials that she covered up her husband’s abuse because it is “culturally accepted” in Syria.

“Aldndal stated that being assaulted by her spouse is culturally accepted from the country they are from,” the Fredericton brief police stated.

…Aldndal testified that Rafia often beat her and that on May 18 he threatened to kill her if she ever left him, Crown prosecutor Claude Hache said Thursday. Rafia was only arrested after a family friend took Aldndal to Dr. Everett Chalmers Regional Hospital which reported her injuries. Aldndal initially tried to cover for her husband, claiming that the injuries were from falling in the bathtub.

Hoping to receive a light sentence, Rafia pleaded guilty on May 26 to causing bodily harm and uttering threats. Of course, he contradicts his plea by maintaining his innocence through placing the blame on immigration officials.

Unfortunately, the police brief falsely claims that all domestic abuse is illegal in Syria and that “if the aggressor is caught, they will go to jail.” This statement is misleading. While domestic violence without just cause is punishable, violence against women by family patriarchs for disobedience or defiance is undeniably justified in Sharia law and offenders often go unpunished. In fact, women have trouble getting divorces from abusive husbands as Sharia courts typically force them to reconcile. –Read more

Is a culture that not only permits but CODIFIES wife beating to be granted special protection in modern Western democracies? And isn’t anyone who asks hard questions called out as ‘Islamophobic’?

Doesn’t that practice run Directly Counter the very freedom that women put on silly hats and march for?

And wasn’t Sarsour — the Sharia advocate — among the women (ironically) leading that ‘Feminist’ march?

Maybe Liberals can stop playing identity politics long enough to take note of the VALUES of the groups they’re propping up.

A group with a history of beating wives and throwing homosexuals to their deaths from rooftops just MIGHT have different values than some of the other constituents for which Liberals pretend to be great advocates.

There’s a podcast where they’re not afraid to discuss issues like this. Enjoy!