Chicago is where the Obamassiah came from, they’ve been run by the Democrats since forever, and they’ve got those gun control laws… so it should be really safe, right?

While Chicago is busy spending itself into oblivion and hurtling toward bankruptcy, their citizens have to fear for their very lives.

Hey Chicago: even the BBC thought this story was newsworthy. Whatever you have been doing so far just isn’t working.

Latest numbers indicate at least 102 people were shot over the weekend — with 15 fatalities.

More than 1800 people have been shot in Chicago so far this year.

Fifteen people were killed and 87 others were wounded. Nearly half the shootings occurred in the last 12 hours of the long holiday.

The last time the Fourth holiday spanned four full days was in 2013, when July 4 fell on a Thursday and many people had Friday off. At least 74 people were shot between Wednesday evening and early Monday that year, and 12 of them died, according to Tribune data.

The violence this year was largely confined to the South and West sides, where hundreds of officers on overtime were deployed. The youngest person shot was a 13-year-old boy seriously wounded in Gage Park on Friday night. The oldest was a 60-year-old man in the Lawndale neighborhood. –Tribune

If you want to really keep tabs on what’s going on there, HeyJackass has a great breakdown on all of Chicago’s gun violence.

(It’s where we got this graphic: 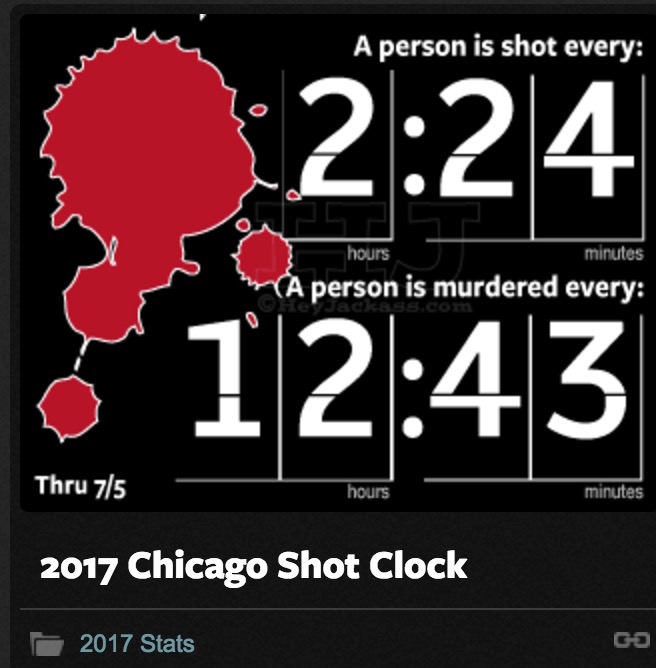