If anyone can understand what it’s like to get hit with the blunt end of the media’s pool cue, it would be Lindsay Lohan, and now she’s weighing in.

The media loved riding the personal details of her life, whether her triumphs or humiliations. Why? Because every mention of her name was good for ratings.

Her name has been like catnip for ratings, clicks or shares. (Sound familiar?)

So when she weighs in on the beat-downs the media have been giving Trump, she speaks from experience.

And one more thing… instead of seeing the Trumps as the monsters under the bed that the Media (D)iscredited portrays them as, she actually KNOWS them. Personally. 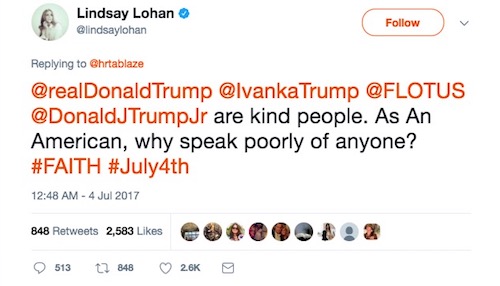 They are kind people. She’s American first, not ideology first. And isn’t that the whole point of July 4th? “E pluribus Unum and all that?” 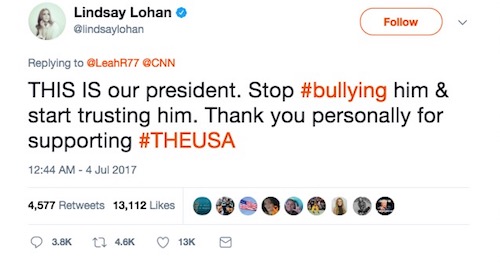 It seems like Ms. Lohan has got that part figured out.

As for the media? They’re too busy freaking out over animated memes.

Then again, we WERE warned… they’re not interested in those ‘adorable’ journalistic ethics. Because ‘this is a business’ after all.