The Vatican Pontifical Academy for Life issued a statement on Charlie Gard. If THAT is their position, they should change their name.

ClashDaily reported on the heartbreaking story of 10-month old Charlie Gard and his parents that are fighting for him to live.

And not just the usual fight against the insurmountable obstacle of a genetic disease, which is bad enough, but against the socialized healthcare system itself that is refusing them the opportunity to attempt to save his life.

The courts have ruled against allowing the parents to choose what is right for their son and attempting to treat him in the United States while paying for it themselves with the $1.6 million that they have raised. Charlie’s parents are not permitted to take him home to die in the crib he has never slept in and were denied even the weekend to say goodbye. His lifesaving equipment will be removed before Monday so that he can ‘die with dignity’ against his parents’ wishes.

Against this backdrop, enter the Catholic Church.

Even if you’re not Catholic, you could be certain that the Vatican would always stand on the side of life and in support of the nuclear family.

Times they are a-changin’, I guess.

That’s no longer the case.

Here is the full version of their Statement on Charlie Gard:

We feel close to him, to his mother, his father, and all those who have cared for him and struggled together with him until now. For them, and for those who are called to decide their future, we raise to the Lord of Life our prayers, knowing that “in the Lord our labor will not be in vain.” (1 Cor. 15:58)

The Catholic Bishops’ Conference of England and Wales issued a statement today that recognizes above all the complexity of the situation, the heartrending pain of the parents, and the efforts of so many to determine what is best for Charlie. The Bishops’ statement also reaffirms that “we should never act with the deliberate intention to end a human life, including the removal of nutrition and hydration, so that death might be achieved” but that “we do, sometimes, however, have to recognize the limitations of what can be done, while always acting humanely in the service of the sick person until the time of natural death occurs.”

The proper question to be raised in this and in any other unfortunately similar case is this: what are the best interests of the patient? We must do what advances the health of the patient, but we must also accept the limits of medicine and, as stated in paragraph 65 of the Encyclical Evangelium Vitae, avoid aggressive medical procedures that are disproportionate to any expected results or excessively burdensome to the patient or the family. Likewise, the wishes of parents must heard and respected, but they too must be helped to understand the unique difficulty of their situation and not be left to face their painful decisions alone. If the relationship between doctor and patient (or parents as in Charlie’s case) is interfered with, everything becomes more difficult and legal action becomes a last resort, with the accompanying risk of ideological or political manipulation, which is always to be avoided, or of media sensationalism, which can be sadly superficial.

Dear Charlie, dear parents Chris Gard and Connie Yates, we are praying for you and with you.

‘We feel close to him and his mother and father’ but not close enough to intervene.

Not close enough to say that parental authority over the life of their child matters.

They cite the ‘complexity’ of the issue.

Aren’t you supposed to stand for life no matter what?

Pope John Paul II, the man who created the institution in 1994, would never have let such a statement be released.

Daniel Payne, Assistant Editor of The College Fix, and contributor to many conservative publications had an exceptional op-ed in The Federalist that is definitely worth the read.

Here are a couple of highlights. (Emphasis added.)

The Vatican’s Pontifical Academy for Life yesterday released a statement that waffles between limp-wristed equivocations and outright willful ignorance of church teaching. If this is where the Vatican now makes its stand, then the most vulnerable members of society—which is to say all of us, at some point—are in trouble.

The Academy attempts to explain away the courts’ decision by citing “the complexity of the situation, the heartrending pain of the parents, and the efforts of so many to determine what is best for Charlie,” acknowledging that “we do, sometimes…have to recognize the limitations of what can be done” in modern medicine.

This is preposterous nonsense, what, growing up, my family called “mental babble.” The situation is not at all “complex”: Charlie’s parents want to attempt to save his life, and the courts have made it illegal for them to do so, in direct contravention of their parental authority. The “heartrending pain of the parents” is now primarily a feature not of their dying child (whom they are trying to save) but of the soft-tyrannical decision of the British courts (which are preventing them from doing so). As for “what is best for Charlie,” the obvious fact is clear: his parents have decided that for him.

The waffling statement and tacit approval for courts to undermine parental authority under the guise of ‘what’s best’ is a slippery slope that the Church should be cautious about.

For example, in Ontario, Canada, it is now legal to remove children from their homes if the parents don’t respect their child’s ‘gender identity or expression’. This anti-Biology is now taught in schools in Ontario. This means that parents can’t even get their children counselling. It is an outrageous goverenmental overreach that diminishes the role of the family.

Where will the Vatican stand on that, I wonder?

Pope John Paul II was aware of governmental intrusion into parental authority and wrote against it.

John Paul II was well aware of the ways in which governments can steal the legitimate authority of parents and families: in “Familiaris Consortio” he affirmed that “the church openly and strongly defends the rights of the family against the intolerable usurpations of society and the state.” One would imagine that one such “intolerable usurpation” would be a government denying two parents the right to try to save their baby boy’s life. And one would imagine that an institution entitled “the Pontifical Academy for Life” would recognize that.

They’ve sided with the ‘die with dignity’ crowd.

It is almost certain at this point that baby Charlie will die. Even if his parents were allowed to bring him to the United States, death would likely be the result. But such a decision, one way or the other, is not the prerogative of the British government, or anyone other than the man and woman who gave Charlie life and wish only to let him keep it. Once upon a time this would have been an uncontroversial proposition, easy for every moral person and institution—including the Catholic Church—to get behind. But the times have changed.

So we must watch as a little boy, not old enough yet to be a toddler, dies “with dignity,” at the hands of a court system with no business making such a decision, and with the meek and tacit approval of a church that, once upon a time, fully understood the stakes of precious human life but now speaks only of “complexity.”

So, with that, might I suggest ‘Academia Mortem’ instead of ‘Academia Vitae’?

Or perhaps ‘Academia Apologia’? Because it’s a sorry excuse for an academy that is supposed to stand for life no matter what.

And to add to the horror show of the statement, the pro-Socialist Pope tweeted out what would be considered a trolling if it had come from, say, the current President of the United States: 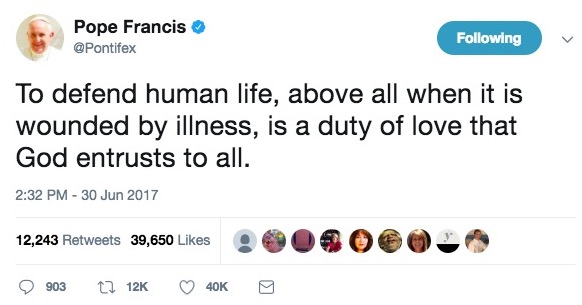 How would Charlie’s parents have reacted to that, I wonder?

Needless to say, the Pope got a whole lotta #SaveCharlie responses.

The Pope needs to be reminded of who he is and what he is supposed to stand for.