It was only a month or two ago that Cable News ‘really, REALLY cared’ about a ‘free press’.
Now that Antifa is jumping journalists and pounding the hell out of them at Berkley, where are they now?

Did you happen to catch any of the reports at Berkley over the weekend?

The ones were Black Masked thugs from Antifa swarmed and attacked anyone and everyone who wasn’t part of their cause. (And sometimes even that won’t save you.)

Reporters in the helicopter caught this nightmare scene.

Clip is from live chopper feed by @kcranews in #Berkeley. No cops seen, this is #Antifa. https://t.co/vQHUculNTX pic.twitter.com/AJvowKzbev

Here’s a closer look of the mob descending upon him:

This is hardly an isolated incident. Even Vice is reporting on it.

A Quebec anarchist site has published an anonymous post defending the smashing of a journalist’s camera at a protest last weekend, saying it will be a necessity in future protests.

“Those who decide that we need to fight back are already up against fascist thugs and the weaponized police who protect them,” according to the post, which went up Thursday morning. “We don’t need yet another enemy putting our safety at risk.” 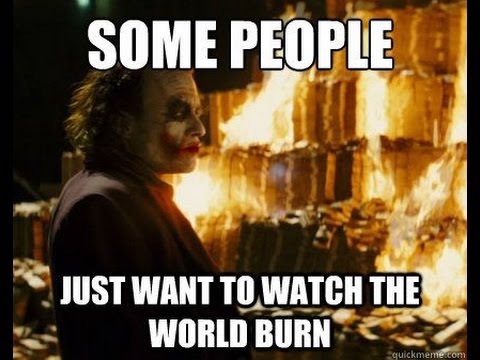 Hear that language? Journalists take note. These people are NOT your friends. It’s time you stop defending them simply because you like the causes they back.

As for the police that weren’t on scene? Maybe this explains the problem. Conservative groups need to pay $15,000 for security. Leftists, not so much.

#Berkeley charges conservative speakers $15000 for "protection" – more than 1y tuition! Libtards? Zero! Hey, the Mob would do it for less! pic.twitter.com/WZLwrqVHqW

So, Anarchists get a free hand to physically assault (while masked) the faces of people they name as ‘enemies’. And the police force will defend them if the pay up for the Protection racket.

(Do they give that payment (in small bills) to someone named Fat Tony, Fingers, or Guido, by any chance?)

Nice Conservative Event you’ve got planned there. Shame if something should happen to it.

So, at Berkeley, where were the police?

I'm still shocked @berkeleypolice escorted us out of the park & placed us in danger. You're a disgrace Chief Andrew Greenwood. #Berkeley

Berkeley police deliberately allowed masked “Antifa” anarchists to jump a barricade and attack a demonstration by a peaceful right-wing group on Sunday, leading to five assaults, including on Patriot Prayer group leader Joey Gibson.
The counter-demonstration had reportedly been “largely peaceful” until that point. —
Breitbart

The police later defended their decision by arguing that keeping the anarchists out would have led to greater violence. There was “no need for a confrontation over a grass patch,” Berkeley police chief Andrew Greenwood said, according to the San Jose Mercury News.
…The result was several severe beatings of those who had gathered to protest against Marxism. Thirteen of the anarchists were arrested, the Chronicle reported.

That’s NOT a good answer.

But the Mercury News report, citing Berkeley law enforcement authorities directly, made it clear that police knew that “Antifa” intended to cause violence, and allowed it to happen:

Berkeley police chief Andrew Greenwood defended how police handled the protest, saying they made a strategic decision to let the anarchists enter to avoid more violence.

Greenwood said “the potential use of force became very problematic” given the thousands of peaceful protesters in the park. Once anarchists arrived, it was clear there would not be dueling protests between left and right so he ordered his officers out of the park and allowed the anarchists to march in.

Don’t expect any kudos or applause from the photographer who got mauled by a mob.

Or by the people who went there to PRAY!

The whole world is watching you Berkley.

Get your sh-t together people.

You are there to SERVE and PROTECT. Remember?

For a school that pretends to care so damned much about ‘justice’ you are failing at the most basic definition of the word.

Objectively bad people are hurting ordinary people, while pretending to do it for good reasons.

A faculty, police force, or media that helps them get away with it is aiding and abetting bad people.

Sort this out, start dragging the ones ‘protesting’ in masks away in zipties, and charge them with inciting a riot.

Hit this hard, and fast. Because it’s already spinning out of control.

And that is EXACTLY the kind of chaos they want.

Because that these people’s REAL end-game.

Is standing down working, or does law enforcement need to step it up?