If the anti-Confederate crusade teaches us anything, it’s that history is obligated to remember you for your worst sins, not your best deeds.

Alright, their hero’s playbook (Saul Alinsky’s Rules For Radicals) would say this:

(Rule 4)
“Make the enemy live up to its own book of rules.” If the rule is that every letter gets a reply, send 30,000 letters. You can kill them with this because no one can possibly obey all of their own rules.

If historical figures must be remembered and vilified for their worst sins, what does that say about AMERICAN POLITICIANS heaping praises upon a KKKlansman? Not just any KKKlansman, either… he was a recruiter! 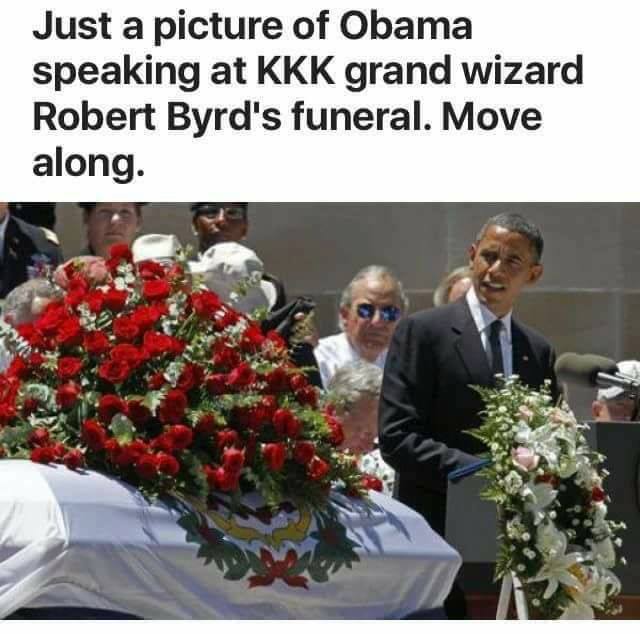 The internet is forever, y’all!

Here is the full eulogy that Barry gave:

Behold, the true face of their ‘hero’:

Byrd joined the Klan at the ripe young age of 24 — hardly a young’un by today’s standards, much less those of 1944, when Byrd refused to join the military because he might have to serve alongside “race mongrels, a throwback to the blackest specimen from the wilds,” according to a letter Byrd wrote to Sen. Theodore Bilbo at the height of World War II.
…He had come of age as a member of the Ku Klux Klan and cast a “no” vote on the landmark Civil Rights Act of 1964 that prohibited discrimination against African Americans and others.
…No single obituary of Byrd mentioned his 2001 use of the term “white nigger,” an early 20th-century anachronism that Byrd employed not once, but twice during an interview with Tony Snow. — DailyCaller

Isn’t he supposed to be giving a rebel yell and full-throated denunciation of the man?

Isn’t praising him somehow giving support and cover to his racist beliefs?

And get busted on a hot mic ‘colluding with Russia’?

And launch his Presidential run in the living room of an unrepentant terrorist?

I guess we shouldn’t REALLY be expecting anything resembling sound moral judgment from him.

(After all, look at the pastor whose church he attended, who famously said “God DAMN America!”)

Related;
Before We Pull Down Any More Monuments… Can We Agree To Do THIS?