But someone may have to explain it to the press. In small words.

Franklin Graham is no stranger to controversy.

Unlike his father, he is unafraid to wade into political controversies.

Like calling out Islam for its treatment of women and minorities, for example.

He has weighed in on Charlottesville Virgina, too. 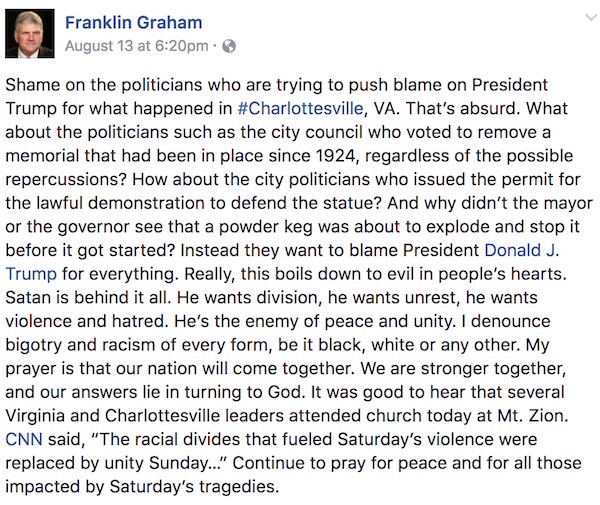 People who are trying to lay this at the feet of Trump are turning a blind eye to some really important and relevant facts.

He added two other relevant posts, as well:

The text of the first one:

Attorney General Jeff Sessions is exactly right—“in no way can we accept and apologize for racism, bigotry, hatred, violence and those kind of things that too often arise in our country.” One race is not superior over another. God created mankind in His image and He loves us. The Bible tells us that, “He made from one man every nation of mankind to live on all the face of the earth,” and “God does not show partiality.” The venomous hatred we saw displayed in #Charlottesville should repulse all Americans. It should take us to our knees in prayer for hearts to be changed. He alone can forgive and heal our land. Everything can change through Jesus Christ. He said, “A new commandment I give to you, that you love one another, even as I have loved you, that you also love one another” (John 13:34).

And the second one commends a thoughtful article to his readers. It featured a link to Condoleeza Rice’s comments on the difference between History and Heritage.

Here is the text he added to that link:

There’s a monument in Jerusalem’s Kidron Valley called Absalom’s Pillar that has been there for a few thousand years. Absalom was a man guilty of murder, treason, and even trying to kill his own father—King David. That’s a part of history—taking it down wouldn’t change what happened. I’m thankful the monument still stands today to remind us of Absalom’s very serious and costly sins. There are monuments in our country today that remind us of the sins of our past, and taking them down isn’t going to change the mistakes we have made as a nation. They remind us of the truth—the good, the bad, and the ugly. Former Secretary of State Condoleezza Rice said in May, “I am a firm believer in ‘keep your history before you’ and so I don’t actually want to rename things that were named for slave owners. I want us to have to look at those names and recognize what they did and to be able to tell our kids what they did, and for them to have a sense of their own history. When you start wiping out your history, sanitizing your history to make you feel better, it’s a bad thing,” Perhaps monuments can serve to help us teach our children and grandchildren to avoid repeating the same mistakes in the future.

Maybe we should give it some thought before we start tearing up the place, and starting fights.

Especially since we now know the true identity of the ones tearing them down is anything BUT pro-American.

Check out Doug Giles and Rich Witmer take on this very issue in the latest Warriors & Wildmen podcast: