How did we get where we are today? By being split into racial factions.

If they are the problem, what do we know about where those racial factions drew their strength?

What a great question.

Fortunately, someone who has studied this issue weighed in.

And since he’s neither black nor white, he can’t be accused of racial bias in his answer.

Who invented white nationalism? The Democrats. And black nationalism? Ditto. So don’t try & blame this on the GOP #Charlottesville

If you heard the rhetoric, there is only one villain in the story in Charlottesville.

But if you look at the clashes, both sides came ready for a brawl.

What the media shows vs what really happened.

Both sides are vile. #Charlottesville pic.twitter.com/LGjQGwT9DS

Where did the KKK have its roots? Democrats.

Skeptical? That’s ok. You don’t have to take Bill Whittle‘s word for it. Or Dinesh’s either. You can Google it.

As for the Black racism? That should be pretty obvious, isn’t it? We’ve come a long way from the days of Rev. Dr. Martin Luther King Jr calling for us to be judged by the content of our character, not our skin.

But that attitude doesn’t sell well in ‘intersectional feminism’ where everybody is a victim of the privileged class.

And who’s been chumming the water on that front, kissing up to all the popular racial tensions we’ve been seeing on college campuses where even LIBERAL white professors get caught up in the craziness?

Who enabled white people pretending to be disaffected black people to ride the racial loathing to fame and success?

Who fanned racial flames by inviting ‘mothers of the movement’ to their party’s national convention?

Which side calls anyone who doesn’t buy into their leftist policies racist-sexist-homophobe-bigot-etcetera?

Which side says if you have the wrong skin color your opinion doesn’t matter on campus?

All of that was bad. But they’ve doubled down since they lost the election. #Resistence

And now the word ‘nazi’ is being thrown around like a midget in a mosh pit.

Who gets to wear responsibility for this? Here’s a hint:

The guy in this picture was described by the woman as her ‘mentor’. 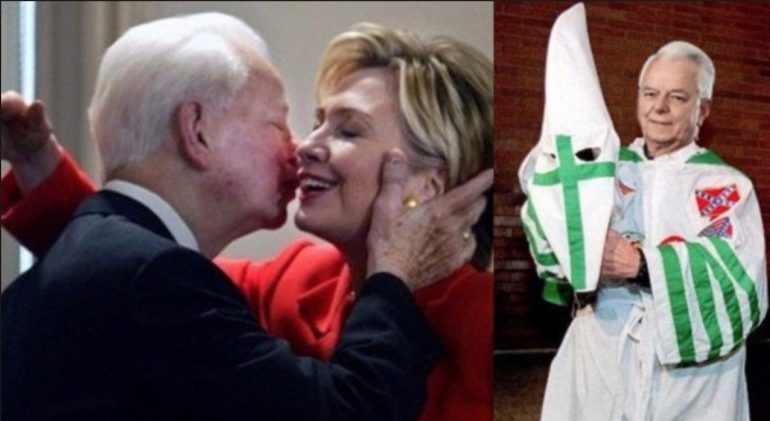 Even Snopes isn’t going to cover for her on this one.

Do the Democrats love the country more or do they love the tool they’ve been using to gain power more?

They’re going to have to choose.

Splitting us into groups, and pitting us against each other is making things worse, not better. For everybody, black, white, and other.

It’s been their favorite method of whipping up support in urban ridings, but at what cost to the nation?

Racism is an ugly thing.

Check out what Doug Giles and Rich Witmer have to say about it in their latest Warriors & Wildmen podcast: