Suddenly ALL the Trump voters are racist, right?
You might think so if you heard the news lately.

Racists coming out of the woodwork, right? Busloads of them.

Then why did the on-the-scene reporters in Charlottesville (Fox) say they only saw ‘about forty’ actual White Supremacists among the protesters? And a lot more counter-protesters?

Could this be the more of the same blurring of the lines?

Everyone to the Right of Marx is called sexist-racist-homophobe, etc.

Anyone who Thinks Bernie Bros and Antifa aren’t cool is all lumped into the new category of ‘Alt-right’. Why? So they can make headlines like this:

Yes, half of Trump supporters are racist

These are the same people who tried to smear Jeff Sessions as a Klansman sympathizer.

The ones who will yell ‘disavow David Duke’ while ignoring THIS picture: 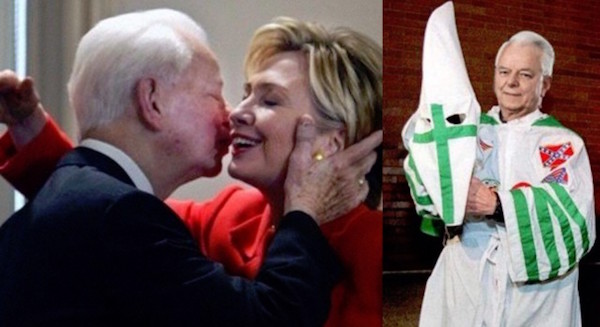 How big a threat are the KKK now? For an event that was months in the planning, they were vastly outnumbered by Antifa and other rowdy (armed) counter-protesters.

Has anyone cared to notice that the biggest Conservative podcaster right now is Ben Shapiro? He’s Jewish.

If other groups had starved the racists of oxygen and stopped relating everything they disagreed with in terms of race and ‘nazi’ the whole movement may well have died a natural death.

But both they and Antifa are symbiotic, feeding off each other’s hate and rage using it as an excuse and a rallying cry.

Real Conservatives don’t ask for much. We aren’t a monolithic movement by any means, but we have some core valeus: Smaller government, less taxes, and the right not to have a government tell it what to do all the time.

That, and being judged by merit, not by which victim status you can claim.

Does any THINKING person SERIOUSLY equate such things with Fascistic, Authoritarian dictatorships?

Then can we move on now?