In the critical moment that, handled properly, could have diffused the violence, and prevented injuries and a death… police did nothing.

Was this a political decision? Are they more afraid of BLM’s ability to whip up a mob on demand, or Leftist lawyers throwing baseless lawsuits around to actually do their job effectively?

Does this have anything to do with the fact that Ferguson, Baltimore, and other police chiefs wind up stepping down, regardless of the chief’s response, or the actual guilt or innocence of the officers involved?

Listen to a reporter on the scene describe how police saw events unfolding and walked away:

That’s a very dangerous precedent to set. It only emboldens the mobs to make sure they reach that threshold of ‘dangerous’ so they can boldly chant ‘who’s street? OUR street’, and without any sense of irony, chant ‘this is what democracy looks like’.

The Charlottesville chief of police categorically denied this.

* However, McKelway says: “I can say, havig been in Emancipation Park from early on that morning, that what I saw with my own two eyes confirms what this law enforcement source told us. At least from all visible apearances. We saw people coming out of that park who had headwounds, who were bleeding from the head, people walking into that park with bats, with sticks — you saw what they were wearing — helmets, body armor, they had come — and this pertains to both sides — they had come to do damage.. you cannot help but notice from that video that police had been more pro-active, they could have potentially calmed this thing down to some degree.” –AceOfSpades

That report goes on to say that the secure area that police had said people could retreat to was no longer accepting anyone, that the police themselves were ‘bee-lining’ it out of there.

The tweet that almost nobody is talking about is the one that tells us that President Trump was RIGHT to say ‘all sides’ in this instance… even if one side stopped short of claiming a life (this time) there was plenty of ‘hate’ to go around. 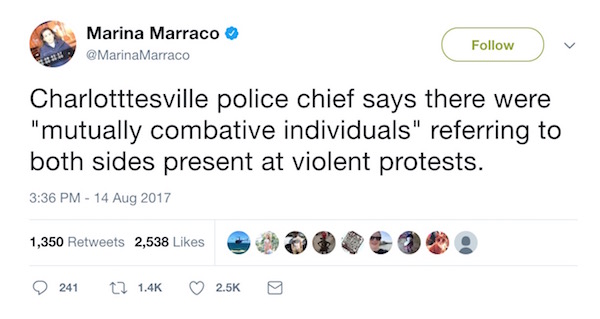 Where were the police?

“There was no police presence. We were watching people punch each other; people were bleeding all the while police were inside of barricades at the park, watching. It was essentially just brawling on the street and community members trying to protect each other.” —Powerline

They were hanging back.

They were not dressed in their riot gear. (No idea why not, considering it was well established that the mob was gearing up for conflict.)

This is not the sort of thing we are used to seeing our cops do. They are known for courage, even COOLNESS under stressful situations.

Our cops don’t typically back down from tough situations like this. It’s what they train for.

Something about this call smells like a political decision.

Meanwhile, Citizens were left to fend for themselves in the face of a violent mob. Rage boiled over. And someone died.

This will only entrench the fringes on both sides, to embolden them, making this problem harder to solve.

And that’s the point.

We have activists throwing big money at these interest groups, to make sure they bring chaos into our cities and neighborhoods. (Soros and the like, who see America as an obstacle to their agenda.)

The only way to prevent their agenda would be to keep the riot from starting in the first place.

We happen to have people equipped and trained to do just that.

Has anyone seen them?