A quick look at his Twitter feed and you’d think this guy is trying very hard to make Rosie O’Donut seem level-headed.

Does he think he’s ‘edgy’ or something? His gig isn’t very original.

Even people who have taken massive head trauma generally have no trouble swearing incoherently and spouting nonsense.

On that point, has Keith Olbermann taken any hits to the head lately?

His Twitter feed is looking like it is suffering from some sort of digital equivalent of Tourette’s syndrome. Without the reasonable explanation of a medical condition. 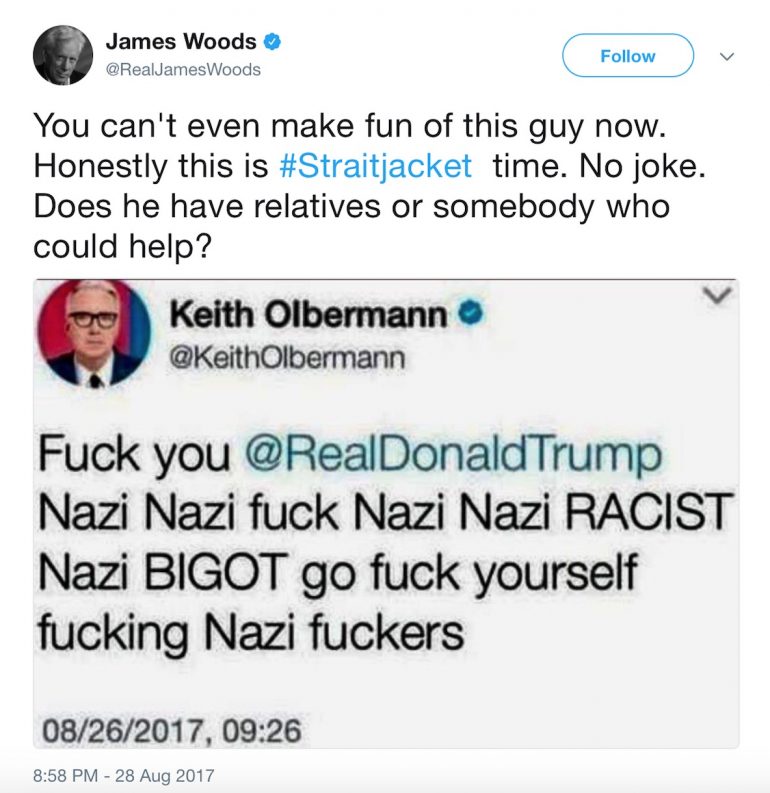 Let’s go back to the beginning. This latest round was triggered by either Hurricane Harvey or the announcement that Sheriff Joe would be pardoned.

Olbermann is coming off as a sad and bitter man.

"Harvey Hurricane is an example of somebody who’s done an amazing job that is being recognized more and more, I notice." #NextTweetIn9Mins pic.twitter.com/WyEe4Tia1r

He is endlessly bitter and sarcastic because he has nothing to add to the conversation.

You and @Potus can go fuck yourselves, you racist Nazi fucks. https://t.co/zWxy3BceoU

Sounds JUST like Antifa, doesn’t he? Probably would cheer that curb-stomping of the unarmed man in Berkley, too.

Now you've banned loyal soldiers, pardoned that piece of shit Arpaio, and STILL not declared an emergency. You are filth, @realDonaldTrump pic.twitter.com/lX75SgBcb2

We don’t remember any Olbermann rage when Obama did that Bergdahl swap, or let all those cocaine and meth dealers back into society (at the very END of his presidency, when any bump in crime wouldn’t reflect upon him) or over Fast&Furious, or Manning. etcetera, etcetera, etcetera — do you?

So you had time today to sign an order expelling loyal brave patriots from the military – but not a disaster declaration? Fuck you, Trump pic.twitter.com/wheJ9MPoGp

Loyal, brave Patriots? Plenty of such Americans have been barred from service for physical or mental inability to perform the job as required. Will you next crusade be for Asthmatics to enter military service?

With suicide so prevalent already among the armed forces, and transgendered people being one of the absolute highest risk groups for suicide, you would think this might actually save lives! Why would you want to RAISE their suicide risk, Keith?

On the latter point, what does ‘on site and ready to respond’ mean to YOU, little Keith?

He made this point more than once:

So you had time today to sign an order expelling loyal brave patriots from the military – but not a disaster declaration? Fuck you, Trump pic.twitter.com/wheJ9MPoGp

Is CNN a ‘Nazi sympathizer’ and ‘shill’ for Trump’s government in your little world now, too?

Speaking of Nazi sympathizer… he wasn’t even CLOSE to done yet.

Funny how they never expand on what the ties actually are. When studied, no one was able to come up with a single believable or confirmable Gorka tie to anything remotely close to Nazi or anti-semitic groups. From the Washington Examiner,

While many progressives and opponents of the regime accept with certainty that Gorka is a Nazi, a white nationalist, or an extremist, they have not been able to find a single statement or essay by Gorka or account of his speeches or comments supporting such positions. Given the volume of his previous writing, that should have been a red flag. The Nazi accusation is about as logical as concluding that a  picture of Gorka absent his glasses represents a secret  endorsement of the Khmer Rouge.

But let’s call him a Nazi anyway. This is the hallucination stage. —PJNet

Hallucination stage, in case you were wondering,  was one argument in the case they were making that Olbermann’s behavior mirrors someone stricken with rabies.

What else was there? In no particular order:

This madman does not understand there is any difference between these two trips. #Resist #Impeach #Remove pic.twitter.com/JO5IN8FqsO

The hurricane is going to do less damage to schools than you are, Motherfucker https://t.co/D71GP8Qnw0

Oh. That one was classy. Calls a woman a MF-er.

That’s sexist AND (technically) a homophobic slur. And says she will do less damage than #Harvey.

That’s not diminishing the real suffering of Texans at all, is it?

Why do you hate seeing women in positions of influence, Keith, except when they agree with you?

Isn’t that a tad bit ‘Patriarchal?’

Glad to see @realdonaldtrump "focused" on Houston. No comment today, just two RTs – only AFTER political attacks on Obama and WaPo #Resign pic.twitter.com/uLq5EH8Ygk

Do you think there is any explanation for the unrelenting effluent flowing out of his twitter account?

Remember, Trump: No one – and nothing – will ever pardon YOU. pic.twitter.com/tqwBmNbWJ0

Republicans: you are now standing WITH an outlaw president AGAINST the courts of this nation. Impeach him now he will take you down with him

Or right. He’s an attention whore.

He’s the guy who has (so far) published the same video clip on his Twitter account fourteen times in the last day:

…A book whose full title we couldn’t print in a headline.

For the rest of you, friends don’t let friends become a ‘Keith’.

Have an intervention. Give them this: