Normally, running your own business is commendable.

But these chicks ain’t normal. 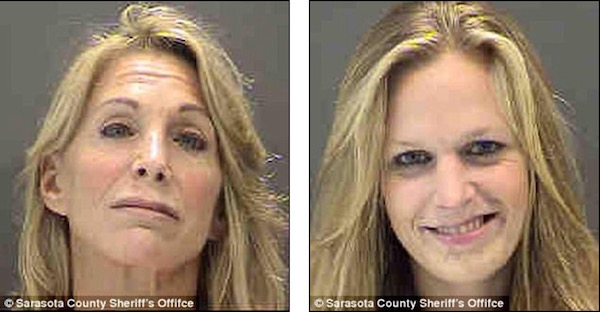 It’s not like they were having Tupperware parties or selling Life Insurance.

Anne (mom) and Jennifer (daughter) were busted running an unlicensed… uhh… ‘business’… from their garage.

Anne Dodge was arrested on Wednesday, after police said she gave an undercover agent a massage without a license.

(She actually tried to claim she’s a licenced minister… and called what she does the ‘laying on of hands’.)

On Thursday, daughter Jennifer Dodge was arrested separately, after police said she offered an undercover sexual favors for $200, as opposed to the $120 price tag on a simple massage.
‘There was a carport on the right side of the house and it almost was like they enclosed part of the porch and that’s where the massage and prostitution was taking place,’ Officer Jessica Sullivan of the Sarasota Police Department said in a televised news conference.

It won’t shock anyone to hear that yes, mom has priors for prostitution.

Mom, you not only failed yourself…

You’ve failed your daughter as well.

It’s too late for HER to read this, but if you know any young ladies, or parents of daughters, put this in their hands.

It’s a crazy world they’re being plunged into. Make sure they’re ready to face it.