If you thought the MAGA hat set them off wait till you see this one!

“I hate her even more now.” — liberal critic

They’ve spent an awful lot of time talking about the clothing choices of the President, his family and staff lately.

Some were grumbling about The President wearing his USA hat.

Others were set off by Melania wearing high heels. (That was the SECOND high heels non-troversy of the summer, no less!)

The possibility of changing into sneakers when she landed was apparently never occurred to these ‘bright sparks’ in the press.

A picture of the ‘fashionista’ who criticized Melania’s heels tore through the internet and put the whole thing in a very different light.

A VERY different light indeed, wouldn’t you say so?

They seem hellbent on proving our claims of ‘Trump Derangement Syndrom’ to be not just ‘right’ but understatement of the facts.

But the fashion complaints by the catty media weren’t done yet.

The other things were a matter of taste.

But what Sarah Huckabee Sanders’s hat said hit them with the force of a slap in the face. 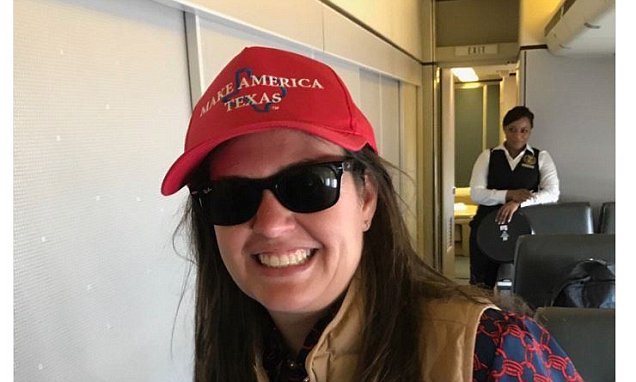 It certainly reminded them that New York and California are NOT holding the national balance of power anymore.

The same way that California or New York are the places the Left point to to remind the Right what their values look like when they are lived out… Texas is the State the ‘Deplorables’ point to as our counter-example of the RIGHT way to run things.

It’s enough to give a liberal journalist a stroke.

We love it! But not everyone did.

The criticism wasn’t particularly eloquent. (Twitter trolls on either side tend not to be.)

Nor were they particularly interested in facts or spelling:

Becuase Koch Brothers are so much a greater ‘money’ influence in politics than that unrepentant Nazi collaborator George Soros.

‘hatred’… how original… deep… and baseless.

Others wern’t worth posting. They included catch phrases like Sick and obscene…
Others had vomit emojis. (yes, emojis. Let’s take THOSE seriously, shall we?)

The reactions were’t all bad, though. Besides the generic praises we saw this reaction: