The Left has been using this tactic to shove their agendas down our throats forever. Is it time we pushed back?

People have been complaining that ‘Trump’ has been politicizing sports.

Really? That’s weird. Because some of us remember way back BEFORE last November when people were politicizing the Anthem that is supposed to bring us all together.

It was perfectly fine for every leftist sportscaster and journalist to pile on Tim Tebow for his ‘free expression’ but suddenly we’re talking about a Leftist cause, so we have to shut up and like it. Because ‘free speech’.

And Tebow wasn’t even protesting or making a political statement. He was celebrating. Like a baseball player who kisses his crucifix and points heavenward.

His ‘celebration’ wasn’t ‘doing the dirty bird’… dude was thanking God. You know, like they used to do at the Oscars, way back when some of us used to watch it.

‘Experts’ among sportscasters and journalists sure had their say back when it was Tebow. But now that fans are speaking up about spoiled, rich players hijacking the Anthem for their own personal soapbox, the league is outraged. Suddenly, they have finally found it within themselves to back ‘free expression’.

(But for all that ‘free speech’ I’ll bet they still can’t wear cleats that will pay tribute to 9/11 or the murdered Dallas cops.)

How ‘progressive’ of them. 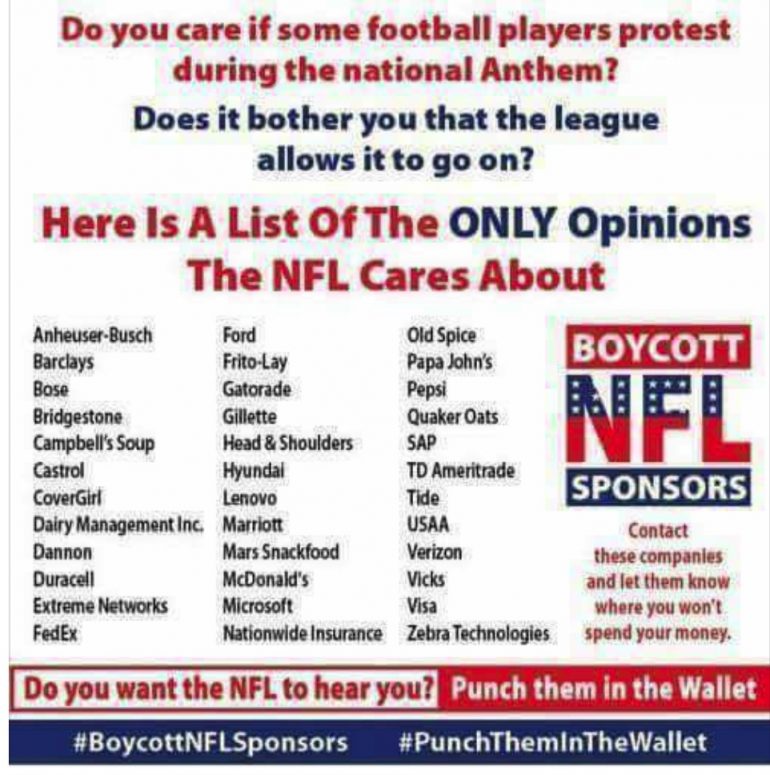 The NFL would not make their money if the sponsors dried up. Period.

And sponsorships WILL dry up if sponsors don’t think the programming will convert into sales.

There are a few ways to do make this work. One is stop watching the NFL. (Already happening, but not enough to REALLY cause them to panic… yet.)

Another way is stop buying the sponsored products.

That’s ok, but in will ONLY be effective if they notice and are able to connect cause-and-effect.

So REALLY get their attention… find a product that you HAD been buying from the list of sponsors. Say, Gilette or Pepsi, or Castrol.

Take a photo of it (or if it’s something like Mariott, take a picture of a receipt) then find that company’s social media page. Facebook, Twitter, or one of the other platforms. (Almost everyone has those these days.)

POST the photo of their product to their page, with a message.

Say (respectfully) that because they support the NFL, and you can no longer support their brand so long as they are supporting an NFL that disrespects your values, traditions, and flag.

Better yet, tell them WHICH rival company will be getting your business.

And of course, pass this message along to anyone you think should see it.

And if you REALLY want to get the attention of the WHOLE league? We’ve got a suggestion for that, too, at the end of this article.

And if you want to send a message to the NFL..? How about this one?