Even if you think this dog’s reason is ridiculous… you can’t POSSIBLY think it’s crazier than what J Lawrence is peddling.

Did you happen to catch what Jennifer said?

Wow — has she gone full-on GAIA-worship? Sure looks like it.

Are we supposed to believe nature is now some sort of a person who pitches a fit when she doesn’t get her way? Should we be worried about goblins and sprites, too?

Ok, then… how tall is ‘Mother Nature’? What does she look like? If she needed an enema, where should the hose go?

(Aw, does this feel like mocking? Maybe that’s because you’re being mocked.)

If we’re now divorcing ourselves from the rules of logic and consequences, why should this dog’s argument not be just as valid as hers?

Especially since even scientists who accept the idea of anthropomorphic warming don’t agree that changes have been significant enough just yet to have a measurable impact on storm severity.

But for anyone who agrees that this is an unusual season, with the Harvey clean-up underway, Irma charging through, and Jose looming on the horizon…?

There is one thing we can all agree on. 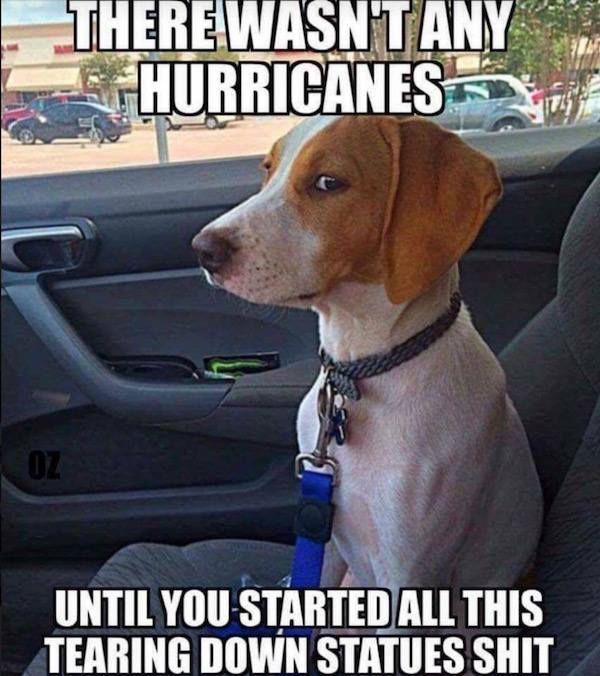 Not sure who shared this one first, but it’s hilarious.

Even the typo doesn’t make it less funny.

If we’re supposed to take JLaw seriously? Then we can play along. We’ll just wait for her answer for this one.

Meanwhile, she could look up ‘correlation doesn’t equal causation’ on her favorite web browser.

Or, if she’d like to rejoin us in reality, she might want to give her head a shake and read this.