You might almost think these dopes are TRYING to deep-six their ratings.

Since when did they think we turned on sports for their POLITICAL opinions?

Ever since Hollywood became hyper-partisan, sports was the one place we could turn for a break from the Preening Leftists. Those days are long gone, now.

ESPN employee, Jemele Hill created a firestorm with a series of tweets that blasted Trump as a ‘white supremacist’.

She has since taken them down, after getting her wrist slapped (ever so gently) by ESPN. 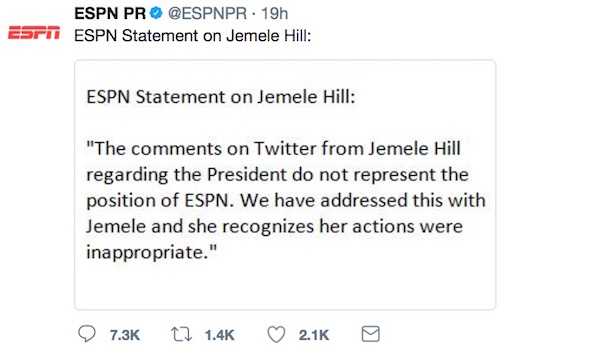 Oh. It’s inappropriate. She’s taken it back. Right? (Because she wouldn’t want to hurt her employer’s ratings.)

Let’s look at that timeline of hers. Strange — if she ‘realizes’ it’s ‘inappropriate’ and has taken it back, why is this tweet still there? 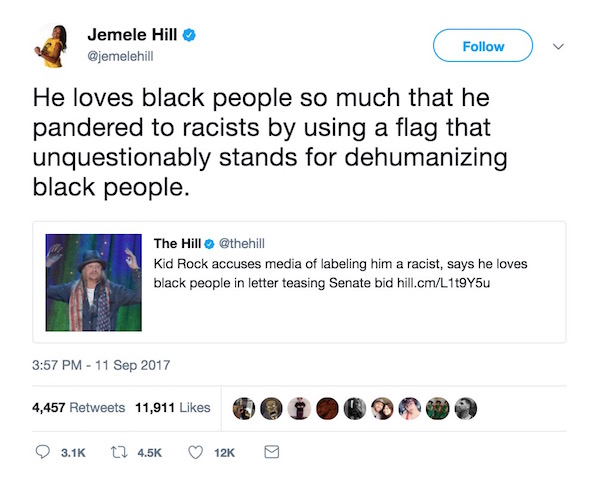 She has a platform at the national level largely because of her connection to ESPN but hasn’t figured out that what she says on that platform could similarly HURT ESPN? Well, nobody’s called her a genius.

Here’s a quick cross-section of the responses:

Isnt good enough @ESPNPR @espn. SHES not apologizing, U r FOR her! If u dont fire @jemelehill?? Her 'comments' 100% represent YOUR position! https://t.co/6wDZ5SGaec

Where was this when Sage Steele offended ppl? RT @ESPNPR: ESPN Statement on Jemele Hill: pic.twitter.com/HdnjxDgLtF

YA, Right, Did you Fire Her, like you fired Schilling @gehrig38 for standing up for our Constitution? Of Course Not!#America Hating @ESPNPR

Explain why Curt Schilling @gehrig38 was let go then? FAR more talented than @jemelehill, who I can't figure out how she has that job.

Do something @espn @ESPNPR about your racist employee, Jamele Hill! We're getting fed up w/ the double standard! #FireJameleHill

What in the hell is going on over there!? It should be no wonder your viewers keep dropping. Good job, again

wasn't Doug Adler fired for using the word "guerilla"? and this receives a slap on the wrist?

How many viewers are y'all willing to lose before you realize we don't like politics in our sports. ????????????‍♀️ #boycottespn #fireJemeleHill

That last one is actually a good observation. They don’t fear boycotts because they get an automatic payday from everyone with the cable package they’re bundled in.

Maybe it’s time we demand a consumer protection law that allows customers to specifically exclude channels that offend them from bundled packages… meaning ESPN, CNN and other companies that rely on that income would start caring about market forces.

Did these people learn nothing from some of the ‘shut up and sing’ blowbacks?

Has she thought of which viewers are PAYING her paycheck?

For one thing, even the most sparse estimates figure more than 60% of Americans are White. As for the political affiliation of the viewers:

Matt Sherman at National Journal republished this chart from last year that showed the tight relationship between athletics and politics.

So she’s actively slandering whites and Republicans. Because they disagree with her politics.

She should read that parable of the frog and the scorpion crossing the river, and ask herself if she REALLY wants to be the scorpion in that story.