What she did to save herself would make for a blockbuster film even if an adult did it.

But Jasmine had not yet started ninth grade.

Jasmine Block, 15, was abducted by three men, assaulted, and held against her will for about a month before she had a chance to make it to freedom.

One of her abductors, Thomas Barker, was a family acquaintance and claimed he needed help with a family emergency. Only when it was too late to get away did she realize the danger she was in. 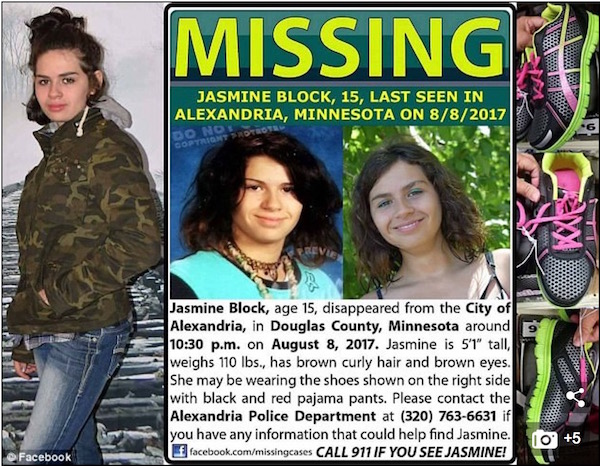 Her captors held her under guard and took her to several locations in the area, including a cornfield, and an ‘unoccupied property’.

On one of those trips, she saw her first opportunity to escape.

Then on Tuesday, the men headed to a nearby town for lunch, leaving Block unattended for the first time since her abduction.
The 15-year-old used the opportunity to escape. She tried knocking on several doors before swimming across a section of Thompson Lake, then continued on foot to a nearby community, where she flagged down a passerby and asked him to call 911.
While she was sitting in the Good Samaritan’s car, awaiting police to arrive, she spotted one of her alleged kidnappers drive by and alerted the man, who helped police track down that suspect, reported Voice of Alexandria. –DailyMail

Here are the three losers that (allegedly) abducted and assaulted her:

Block later assisted police in locating the other two men, and all three were taken into custody. Barker, Powers and Holby are currently being held in the county jail on probable cause for kidnapping, false imprisonment and assault.

Good on her for having the guts to take her chance when it came.

She was raised right when so many others aren’t. Give the young ladies the guts and grit they’ll need to stand tall in a broken world, without becoming some angry feminist.