There is a difference between being gutsy and being reckless.

No matter how careful you are, these waves are dangerous.

A 16-year old athlete who was a rising star in the professional surfing world has died after he fell off of his board and drowned during Hurricane Irma.

Zander Venezia, a native of Barbados, reportedly fell off his board and hit a shallow reef at a beach called Box by Box, it said. He and other surfers were riding a swell generated by the Category Five hurricane on Tuesday.

An autopsy revealed that the Olympic surfing hopeful was knocked unconscious by the fall from his board and then drowned.

Speaking to the magazine Surfline, pro-turned-surf instructor Alan Burke said that Zander was knocked over by a ‘closeout set’ – a wave that closes in from both sides – and ‘likely hit bottom’.

Venezia is the son of a surfer and just this year had won two competitions — the Rip Curl Grom Search in the Outer Banks in North Carolina in mid-August, and the National Scholastic Surfing Association regional championships in April. 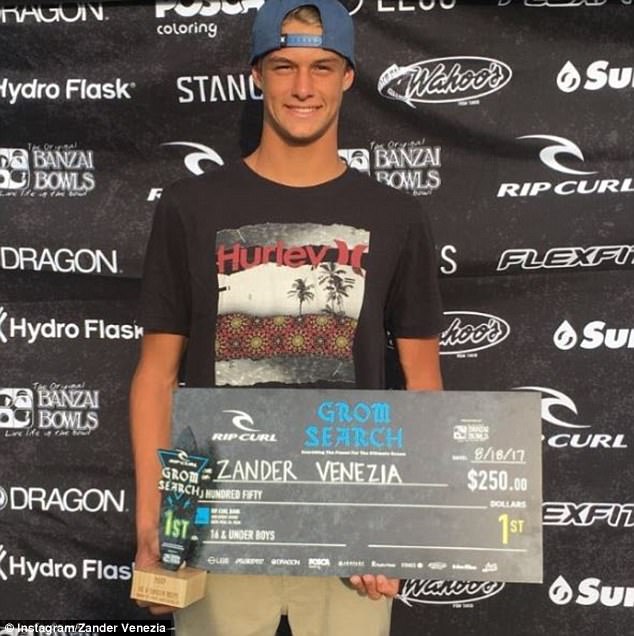 He was also expected to represent his country in the 2020 Olympics. This is the first time that surfing has been included as an event.

He must have thought that he was well-prepared to handle the waves.

Hurricane Irma was a Category 5 storm and is the strongest hurricane in recorded history.

No matter who you are, it’s not a good idea to surf in that.

The waves might look awesome, but the risk is too great.

Although Irma didn’t pass directly over Barbados the high winds can still create massive waves that affect nearby islands. 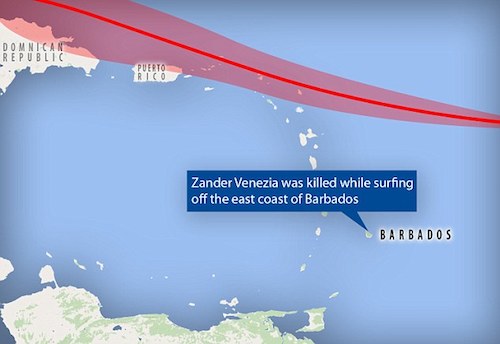 Nathan Florence, who was among the group of pro surfers who had flown into Barbados to surf Irma’s swell, was the first to get to him and start performing CPR.

‘Zander was bleeding, and he wasn’t moving. They tried to get him to the beach quickly, which was very difficult,’ Burke said. ‘Box by Box is a tough place to get in and out of, even if you have the ability. There’s lots of big rocks around, and some stick out of the water.’

Zander should have listened to a veteran surfer:

‘That wave only breaks when you have hurricane swells and it breaks in a different direction, so that swell breaks like once in a blue moon. When it is breaking guys go there because it is a beautiful wave, but it is pretty dangerous,’ Holder told Barbados TODAY.

He added: ‘In my 45 years I have never surfed that break, I surf at Soup Bowl and other places around the island but I never surf that break because it is pretty dangerous. The way the waves are coming in today even at Soup Bowl, you have to be on your ‘A’ game. You must know what you are doing because out here is not easy. If you are not a professional, today is a day you should sit down and watch.’
Source: Daily Mail

What a horrible and preventable tragedy.

This kid had a bright future ahead of him and now he’s gone.

He really thought he could handle it, but even he was unprepared for the Category 5 waves.

Let’s hope that other surfers learn from this tragedy.