Beckham is NOT going to like this. Will this send a message to other players that want to pull this kind of stunt?

Last week Giants wide receiver Odell Beckham Jr. pretended to pee like a dog in the end zone after scoring the first points against the Eagles.

The league was apparently not impressed.

He has hinted that his little act was a hit-back at President Trump’s S.O.B. comments in Alabama.

It’s going to cost Beckham a few grand for his little ‘protest’.

The talented receiver had just scored the first points of the day against the Eagles on Sunday, making a good fourth-quarter catch in the end zone, when he got down on all fours, lifted his leg, and pretended to pee.

‘I was in the end zone. I scored a touchdown,’ Beckham told the New York Daily News. ‘I’m a dog, so I acted like a dog.’

Really, he’s a dog so he acted like a dog?

Beckham isn’t the only one injecting politics into sports.

LeBron was doing the same with comparable style and grace:

…’I didn’t know if the rule book said you can’t hike your leg,’ he told the Daily News.
‘(The official) said I peed on somebody. So I was trying to find the imaginary ghost that I peed on, but I didn’t see him.
Source: Daily Mail 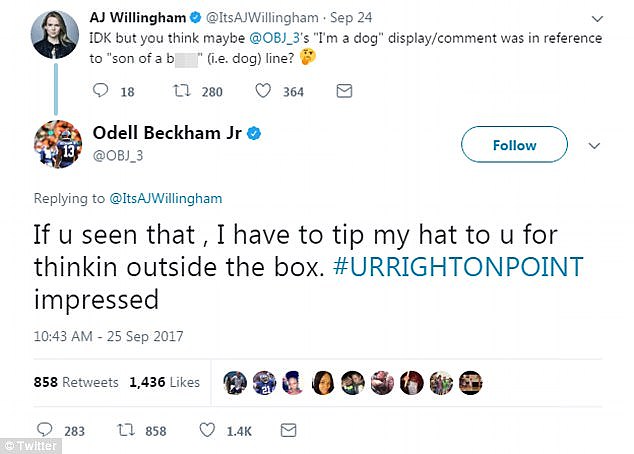 It just makes one wonder though — if the league is so concerned about Odell Beckham’s ‘dog peeing’ routine and fining him for it, why are they condoning the ‘Take A Knee’ during the anthem?