Remember when Jim Carrey was the highest-paid funny man in Hollywood..? What the hell happened to him?

For all the moral preening we get from Hollywood ‘A-listers’ their PERSONAL lives are absolute dumpster fires.

Jim Carrey’s former girlfriend — Catriona White — left a suicide note that shed light on just what the Hollywood ‘fast life’ looks like… and how it destroyed her.

Now that her surviving family has named him in a ‘wrongful death’ suit, some of the particulars have become public, including the out-of-court settlement they had arrived at, and the note she left in her ipad shortly before her suicide. 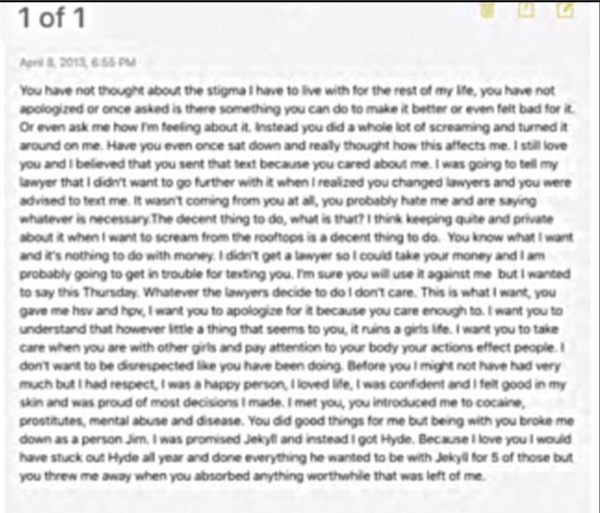 She closed the note with these damning words:

Before you I might not have had very much but I had respect, I was a happy person, I loved life, I was confident and I felt good in my skin and was proud of most decisions I made. I met you, you introduced me to cocaine, prostitutes, mental abuse and disease. You did good things for me but being with you broke me down as a person Jim. I was promised Jekyll and instead I got Hyde. Because I love you I would have stuck out Hyde all yer and done everything he wanted to be with Jekyll for 5 of those but you threw me away when you absorbed anything worthwhile that was left of me.

The star dismissed their accusation that he caused her death and said instead that she decided to take her own life because she felt guilty about extorting him two years earlier and that she was upset about a message her mother had sent her two weeks before she died.
Carrey said it was a ‘mistake’ to settle the claims in 2013 with White and her former lawyer Filippo Marchino and vowed: ‘I will not give in a second time.’ –DailyMail

In that same article, the star gave his own rather lengthy explanation of what he thought really happened.

But whether you chalk it up to drugs, or crazy Hollywood ‘gurus’, Carey has clearly embraced some pretty loopy ideas.

On Friday, White’s attorney Michael J. Avennatti accused the actor of being unstable and pointed to a recent appearance he made at New York Fashion Week which drew concern for his wellbeing.
‘As his red carpet interview from a few weeks ago shows, the guy is incoherent and unhinged. He needs help,’ Avennatti said.
The interview occurred on September 9 in New York City. Carrey, who’d arrived alone to the event, told E! reporter Cat Sadler who asked him a question: ‘There’s no meaning to any of this.
‘I just wanted to find the most meaningless thing that I could come to and join, and here I am. You’ve got to admit, this is completely meaningless.’
When she responded to say the event was scheduled to honor icons, he replied: ‘Celebrating icons? Oh boy, that is just the lowest aiming possibility that we could come up with. Icons. Do you believe in icons? I believe in personalities.
‘I don’t believe that you exist but there is a wonderful fragrance in the air.
‘I don’t believe in icons. I don’t believe in personalities. I believe that peace lies beyond personality, beyond invention and disguise. I believe we’re a field of energy dancing for itself. And I don’t care.’ –DailyMail

How often do we really think about the collateral damage of the A-lister’s ‘fast life’?