And to think his opening line was about Trump lacking empathy.

If you were ever wondering whether those smarmy talking heads were real people or just a TV alter-ego, this clip should clear that right up.

Well, for once it’s the MEDIA who had to deal with an embarrassing leak. Out-takes from O’Donnell’s show. And it was bad.

Watch Lawrence O’Donnell turn his infantile rage on and off like a switch when that ‘on-air’ signal goes on.

As you read this, keep in mind, THIS is his ‘pinned tweet’.

If Trump gets dementia, how will we know?

How did he go from this smarmy Guy-Smiley look, making snide comments about Trump… 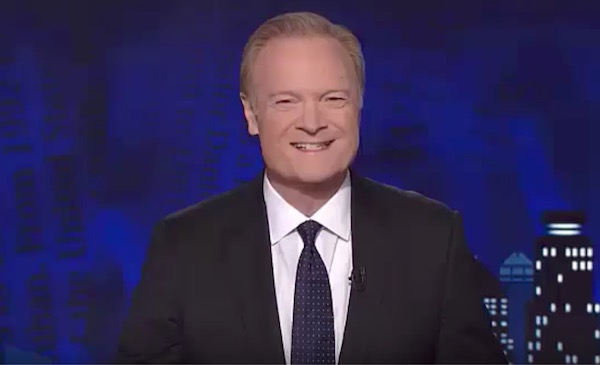 To Grendel, the monster from ancient legend… 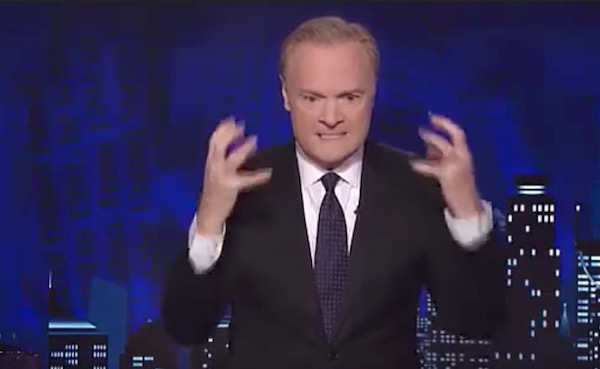 And back again without skipping a beat?

Whenever the on-air light came on, he got back into character and feigned compassion for all the people whose suffering in Houston he failed to appreciate.

Meanwhile, whenever he was off-air, he was cursing a blue streak. ‘Mr. Empathy’ was denigrating the ‘peons’ on the other side of the camera. Idiots. Insanity.

Problems in the control room. People talking into his earpiece that should not have been on that frequency. Annoying stuff, to be sure, but he’s not exactly paid minimum wage to remain professional in difficult situations.

But he was only willing to be ‘professional’ for ‘the public’. The poor slugs in the studio, got to see him in his more natural form.

Between obscenities, his arms twitched like there was a live current running through them.

A worker somewhere can be heard hammering about halfway through this and he about loses it. 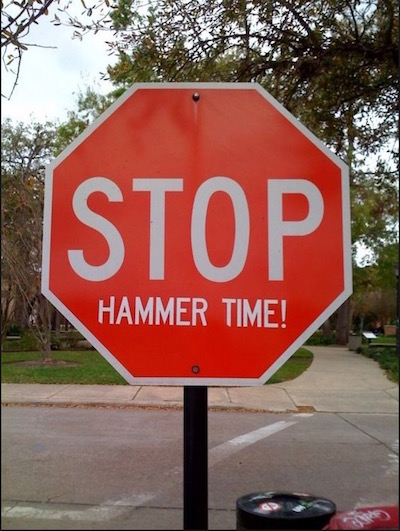 ‘Stop the hammering up there. Who’s got a hammer? Where is it? Where’s the hammer?
‘Go up on the other floor. Somebody go up there and stop the hammering.
‘Stop the hammering.’
(An MSNBC staffer says: ‘I think it’s coming from downstairs.’)
‘I’ll go down to the g****ned floor myself and stop it, keep the g*****ned commercial break going.
‘Call f***ing Phil Griffin, I don’t care who the f*** you have to call. Stop the hammering.
‘Empty out the g******ed control room and find out where this is going on.
‘It’s either there or there. Or out there somewhere.
‘The woman talking in my ear was talking about the Labor Day special repeatedly every time we went to a SOT.
‘What do you mean in the conversation? Not in the Bush SOT, no.
‘F***ing out of control s***.’ — transcript courtesy DailyMail

He wasn’t even CLOSE to done. He continued with his faux outrage at how unfeeling Trump and his supporters are, in an immigration segment before popping off at all the ‘idiots’ this pampered clown has to work with.

As you read the next segment ask yourself how it was that this embarrassing out-take was mysteriously leaked? It couldn’t have been the ‘idiots’ Mr. Empathy was so publicly insulting in the control room, could it?

‘… harass and intimidate people of color. The new sheriff of Maricopa County who beat Joe Arpaio joins us next.
‘I don’t know why I bother to say how to cut the slots when you don’t do it.
‘I just. I don’t why I just…
‘Now I have to chase those stupid g*****n end trails that you allowed him to stick out there.’
(O’Donnell then angrily throws a small object to the ground)
‘Jesus Christ. Crazy f***ing sound coming in my ear. This f***ing stupid hammering.
‘I told you why I wanted those f***ing words cut.
‘It just f***ing sucks. It f***ing sucks to be out here with this out-of-control s***.
‘Any f***ing thing can come into my ear at any moment. That’s what I know. Anybody can get into my f***ing ear at any time.
‘Some woman talking about what we’re doing after the show.’
(O’Donnell takes a lengthy pause as he reads his notes)
‘These f***ing things.
‘There’s a reason these words have to be cut precisely.
‘And everyone in the audience who is going to complain about what that guy just said is absolutely right.
‘How do you say this guy’s last name?
‘F***ing guest’s faces coming up in the middle of a f***ing script.’– transcript courtesy DailyMail

Here is his ‘apology’: 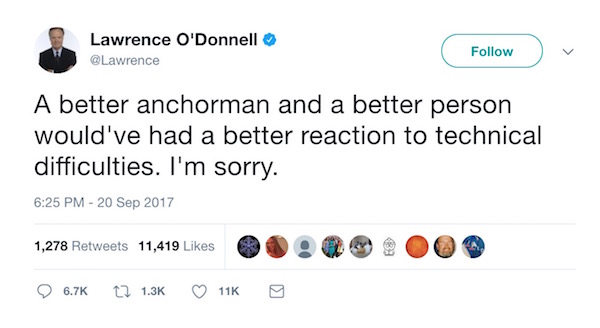 Dude, the problem isn’t that you are a flawed human being… it’s that your ENTIRE TV SCHTICK is pretending you are NOT morally flawed, but in fact morally superior to Trump, specifically, and conservatives generally — in every possible way.

And Irony of ironies — you got busted.

The very thing you were ‘hammering’ Trump for — ‘lack of empathy‘ — toward people he had zero direct contact with was a sin he himself was guilty of toward people who were his very own support staff.

You know, the same ill-treatment of subordinates his beloved Hillary is known for. Think that might have been why you were exposed as an ill-tempered little bitch?

Lawrence O'Donnell seeing that he is trending…but then realizes it's because of Eight Crazy Minutes #StopTheHammering >>> we'll do it live pic.twitter.com/NfFdNzwMNn

#stopthehammering @Lawrence! #Insanityinmyear Good god what a prima b*tch you are, Larry.