The NFL players that are protesting the flag and the anthem have set such a WONDERFUL example for our children, don’t you think? This high school is following their lead on protesting the anthem.

A number of students in the marching band in Ames, Iowa, decided to walk off the field during the anthem before a senior football game to protest. Others didn’t leave the field but refused to play their instruments.

Why did these Ames High students protest the anthem and the flag, you ask?

Well, because of racism, sexism, and homophobia in the school.

Just like Donte Stallworth says, it’s not just about one issue, it’s about all the progressive issues.

There was indecision on what theme the Seniors’ night should be — it was initially supposed to be a ‘Patriotic’ theme with American-themed attire, but after some administrators told the students that patriotism was ‘too controversial’, it was changed to ‘Pink Out’ which is to show support for Planned Parenthood.

Because that’s not controversial.

Everyone’s just gotta #Resist — even if it means supporting the killing of innocent babies.

The students had planned to kneel for the anthem but were advised by their Principal, Spence Evans, to walk off instead. So they did. 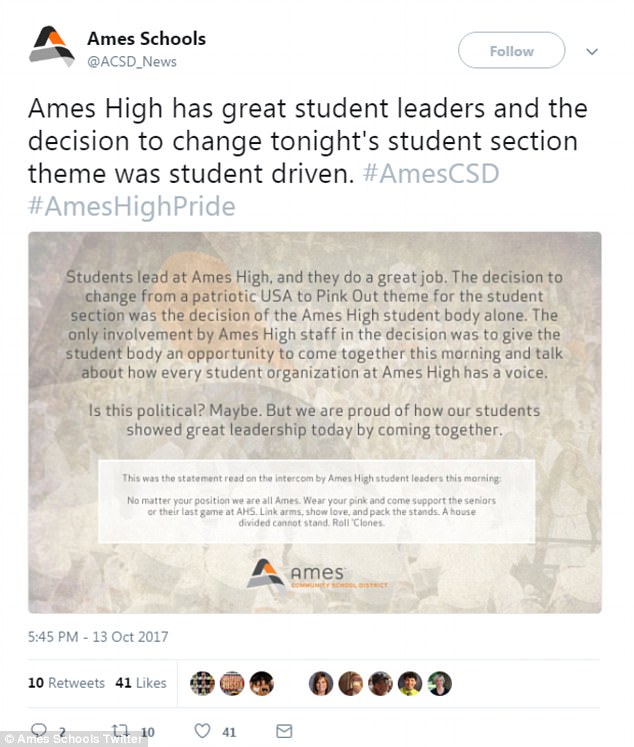 The statment says that it was a student-led decision to change the theme from Patriotic to Pro-Planned Parenthood. According to the Des Moines Register, however, ‘administrators’ told the students to change the theme because American patriotism is ‘too controversial’.

The statement also says that the School District is ‘proud’ of the ‘leadership’ of the students, and they don’t care if it’s politcal.

One band member, Kira Davis, said the demonstration was ‘an expression of my anger and sadness in the direction our country is heading. It’s to express I stand with people who are feeling persecuted or marginalized by the current president or people in power.‘

It’s about Trump, you say?

I’m old enough to remember when the flag and the anthem were symbols of unity instead of symbols of division.

These kids need a proper education instead of whatever the heck it is that these Ames administrators are giving them.