For the first time, there’s a law on OUR side of the ocean putting certain restrictions on where and when full-face coverings may be worn. Let the debates begin!

As reported previously, the courts in Europe have upheld the right for individual nations to impose a ‘burka ban’. And now, the first variation of such a law has been invoked in North America. (We covered that story here.)

Quebec — Canada’s French Province — has a long history of putting its own cultural agenda ahead of any ‘Politically Correct’ pressures.

They are an aggressively secular/irreligious — and Hard-Left — province. While it’s usually Christianity getting thrown under the bus there, their muscular secular instincts have conflicted with Islam.

There is a new law on the books pitting Freedom of Religious expression against the right of the state to make laws that — for safety or other reasons — would infringe upon those freedoms. 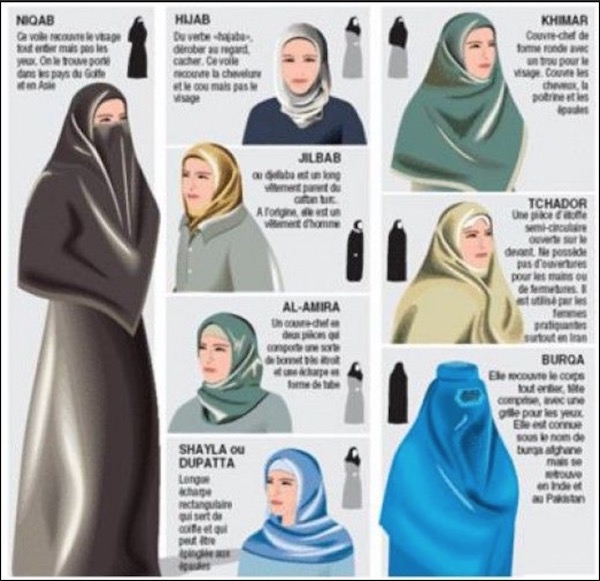 As the graphic above will remind us, very few Islamic women go ‘full beekeeper’. In most instances, a simple headscarf that leaves the face uncovered is all their religion’s feminine modesty requires.

Such expressions have no limitation whatsoever. Just like there is nothing preventing Sikh or Jewish men from wearing their respective religious headgear.

This is specifically limited to such coverings as would conceal the identity of the wearer.

“We are just saying that for reasons linked to communication, identification and safety, public services should be given and received with an open face,” Couillard told reporters.
“We are in a free and democratic society. You speak to me, I should see your face, and you should see mine. It’s as simple as that.”
The law prohibits public workers — including doctors, teachers and daycare employees — as well as those receiving a service from the government from covering their faces.
It was extended to municipal services, including public transit, in an amendment made in August.
The Liberals, who hold a majority in provincial parliament, voted in favour of the bill, while all the other parties voted against. — CBC

Interestingly, while some of the opponents didn’t think the state had any right to impose its will on religious expression, others (even further Left) opposed the bill because…

They would argue that the burka is part of a patriarchy that legitimately oppresses women.

WATCH: Viral Video Shows BEFORE And AFTER Sharia — It’s SHOCKING!

Funny how that will throw a monkeywrench in the Left’s narrative that only ‘bigots on the right’ ever — under any circumstance — want to speak up about Islam in any way.

So now, whether you get medical treatment in a publicly-funded hospital, teach children, or ride public transit, you are expected to show your face.

You can BET it will face legal challenges.

Is outlawing face coverings a good thing, or a bad thing? And should the government get involved?