It’s the moment you’ve all been waiting for… ClashDaily’s Big Dawg is at it again.

He’s kicking down the worldview of the wussified, unpatriotic, Christ-loathing knuckleheads in his new book.

Don’t be fooled by the title — this ain’t just for Grandpa.

The Snowflake Generation — and the rest of America — needs a good ol’ dose of ‘Grandpa wisdom’.

Especially if that Grandpa is Doug Giles.

Doug Giles, the bestselling author of Pussification: The Effeminization Of The American Male, has a NEW book out titled: My Grandpa’s A Patriotic Badass and it’s muy caliente! 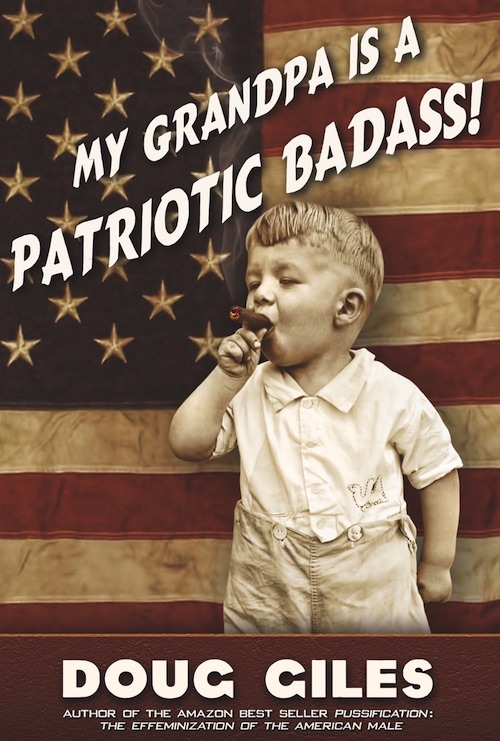 Giles is the King of Sarcastic Retorts and his acidic talent to lambaste whomever’s in his crosshairs is very well known and widely read to the extreme.

My Grandpa’s A Patriotic Badass is the compilation of Doug Giles’ most viral, quotable quotes, that have accounted for a big chunk of the 213 million pages views, in the last five years, on his website, ClashDaily.com.

Regarding why Giles compiled this acerbic battery of epic quotes, filled with wit and wisdom, Doug says, “I want my grandkids to remember me as a Patriotic Badass. Sure, I want them to remember me as a loving and doting, wise and funny, handsome and articulate, hunter and angler, oil painter and Christ following super-hero but primarily … I’d like to be known by them as a Patriotic Badass and that’s why I compiled the most viral and quotable pro-America blurbs that I’ve ever penned.”

If you love God, America, and don’t like the Politically Correct claptrap we’ve fallen into as a nation, you’ll LOVE this book.

Get yours right now:

My Grandpa’s A Patriotic Badass