This USMC veteran has the PERFECT answer to the internet-famous ‘Tough Guy’ that ran off after a woman next to him was shot at the Route 91 Harvest Festival in Las Vegas.

Professional poker player Bilzerian – who tried and failed to become a Navy SEAL – constantly posts photos of himself alongside his arsenal of weapons, working out topless, or surrounded by a bevvy of Instagram models.

But Afghanistan veteran Dakota Meyer, who is married to Sarah Palin’s daughter Bristol, says that when faced with real danger, Bilzerian simply ran away.

Many of Bilzerian’s Instagram posts are pretty racy, so we’ll just show a couple of the more ‘innocent’ photos:

It’s pretty much impossible to defend against a crane kick

Bilzerian has been made famous for pictures of himself with beautiful women, photos of his exercise routines, poker, and endorsing the legalization of marijuana.

He has several photos on Instagram of topless models, and, like Hugh Hefner, is using these women as a means to fame for himself.

He was inspired by the Playboy founder:

What a classy guy.

In one photo, while he’s surrounded by bikini-clad women, the caption claims he’s planning on doing a TV show of Bilzarian opening a ‘weed dispensary’ in Vegas.

He also posts a lot of gun pics because he’s an alleged bad-@ss:

Here is his running away video:

Meyer disagrees and calls him out on his fake tough-guy routine. 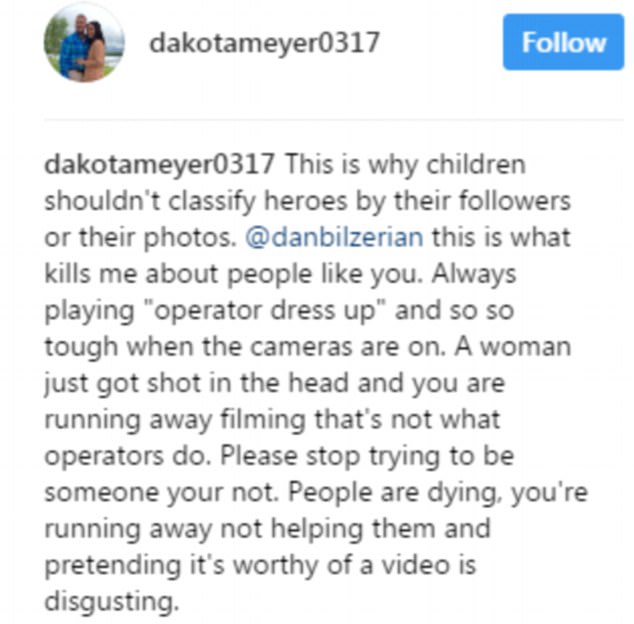 Meyer is a veteran of the United States Marine Corps and was awarded the Medal of Honor for his actions during the Battle of Ganjgal on September 8, 2009, in Afghanistan – becoming the second youngest, living Medal of Honor recipient.

He married Bristol Palin on May 23, 2016, who he has two children with; Sailor Grace and Atlee Bay.
His Instagram post has attracted a bevy of comments agreeing with the Marine and attacking Bilzerian for running away.

‘The one time @danbilzerian had a chance to prove his worth he becomes Operator limp d**k,’ one wrote.

Another added: ‘People like DB are trash because they want to gunclub s**t but when it hits the fan those like yourself who take in the chaos while cowards like him fall to the lowest level of their Instagram training.’

Bilzerian had attempted to become a Navy SEAL more than a decade ago but failed to graduate after several attempts. It is alleged that he was booted out of the program in 2000 because of a ‘safety violation on the shooting range’.

He’s been in trouble with the police, too.

On December 9, 2014, Bilzerian was arrested at Los Angeles International Airport on bomb-making charges. Those charges were dropped but he appeared in court in February 2015, where he pleaded no contest to ‘negligently failing to extinguish a fire in the open’ and was fined $17,000.

In August 2014, Bilzerian was banned from a Miami nightclub for allegedly kicking model Vanessa Castano in the face during a brawl. Castano later filed a $1 million lawsuit against Bilzerian for her injuries.

Did this ‘tough guy’ turn his tail and run when the fit hit the shan?

Many others were heroes — helping the wounded and shielding others with their own bodies.

The police and first responders were running to the gunfire while Bilzerian was running away.

Check out Doug’s thoughts on the Las Vegas massacre: