Tom Petty was nothing short of a musical legend… and he will DEFINITELY be missed.

The news of his passing has been devastating for not just those that knew him, but all those who have been touched by his music.

The star who was only 66, died on Monday, October 2 at 8:40 pm in Los Angeles after cardiac arrest on Sunday night. He was surrounded by family, friends, bandmates, and manager for years, Tony Dimitriades.

Petty was removed from life support when it was determined that he had no brain function after the cardiac arrest.

The veteran star had been found unconscious and not breathing at his Malibu home on Sunday night, as first reported by TMZ.

Responding to a 911 call, emergency services resuscitated Petty before rushing him to hospital in nearby Santa Monica.

Los Angeles police initially confirmed Petty’s death to CBS News on Monday, but was forced to issue an apology as the singer had not yet died.

Hours later it was confirmed by multiple sources he had passed away after being removed from life support.

The singer had a Do Not Resuscitate order in place.

He sang about Learning To Fly, but his music made us all feel like we were soaring:

His music touched all of us, and he influenced so many others that have done the same.

The artist had just completed a 40th anniversary 53-date tour with The Heartbreakers, winning rave reviews with his final performance at the Hollywood Bowl in Los Angeles last week.

His influence was widespread, and could be seen as stars From LeAnn Rimes to Sheryl Crow and Bryan Adams rushed to pay tribute on social media. 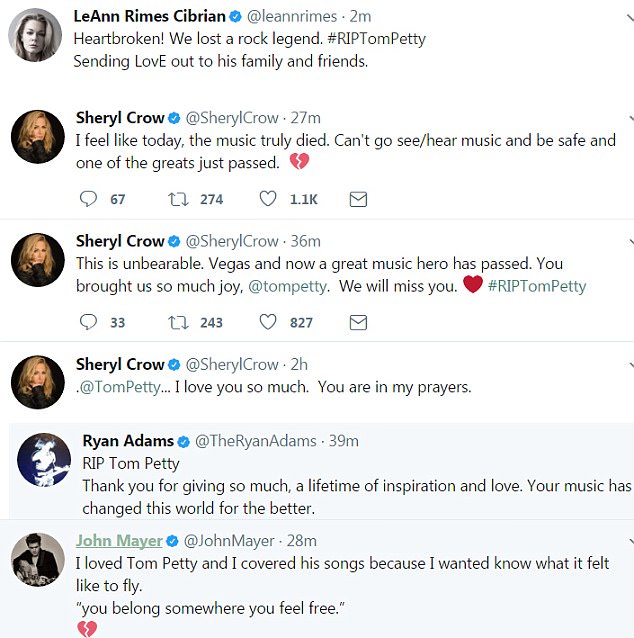 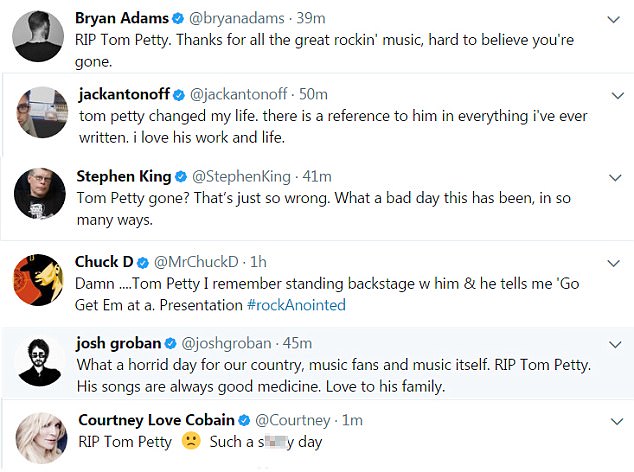 Petty was hoping to take some time off to spend with his young granddaughter.

Talking to Rolling Stone in December, he said: ‘I have a granddaughter now I’d like to see as much as I can. I don’t want to spend my life on the road. This tour will take me away for four months. With a little kid, that’s a lot of time.’

…Petty is also survived by second wife Dana York Epperson. The two first met at one of his concerts in 1991 and married in 2001.

His daughter AnnaKim took to social media to share moving several emotional pictures of her reaction to her father’s death.
Source: Daily Mail

How do you give a proper tribute to a man that has influenced so many other musicians and has made such a lasting impact on music?

Petty was inspired when he saw Elvis filming a movie in nearby Ocala, Florida when he was a young boy.  He even got to ‘say Hi’.  Although he didn’t immediately jump into making music, that moment affected him and changed the course of his life.

We could just put every song by Tom Petty here as a tribute.

VH1 featured Tom Petty and the Hearbreakers in their Behind the Music series.  You can watch it here.

Tom Petty chased his dreams and we’re all the better for it.

Hollywood wouldn’t be the same without his contributions. Who can forget that scene in Jerry Maguire with Tom Cruise cranking up Free Fallin’ on the radio?

Once he burst onto the scene, he dominated it for decades:

His music was a beautiful mix of a variety of styles paired with poetic lyrics.

His music grabbed us on an emotional level that was unparalleled.

One of our personal favorites, I Won’t Back Down is almost an anthem:

And quite a juxtaposition to that is the beautiful and melodic Southern Accents where Petty shows his pride in his Southern roots:

This man could do it all musically and make it seem effortless.

We would be remiss if we didn’t include one of the songs by superband, Traveling Wilburys:

And here is the final song performed on September 25 at the Hollywood Bowl on the last day of the Tom Petty And The Heartbreakers 4oth Anniversary Tour:

Tom Petty’s legacy is one of the greatest in music history.

And he will be missed.