Well, so much for ‘unity’. We quickly learned a lot about these guys’ real priorities.

People are still trying to piece together what happened. We just faced one of the most horrific crimes ever committed on American Soil.

And people are still scratching their heads about the details… like this one:

So, basically everyone has been focussed on the events in Las Vegas.

But some people were not ok with that, were they?

In the midst of one of the bloodiest events in American history, Millionaire Athletes were STILL vying for the national spotlight.

That’s the whole point of a protest, right? To focus public attention on an issue of your choosing? To make people talk about you and your cause?

To BECOME the story? (And for the record, this is why so many fans hated the fact that you were doing it on the field.)

But with the bodies of 58 slaughtered victims still being seen to and recovered by authorities — it was late into Monday when all the bodies were finally recovered — these athletes made sure that THEY stayed in the spotlight.

Could they step back, and let someone ELSE be the story for even one day?

So, while our President called us to Unity, compassion, and love in a very poignant speech — some of the ‘winners’ in the NFL continued their protest. 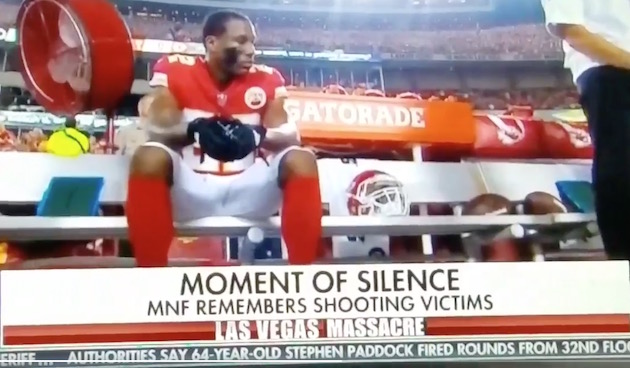 Police rushed to the scene to stop Paddock from driving the body count higher. They were the REAL heroes of the day — they, and the random strangers stepping up to offer real help when needed.

So, hours after the attack?

The NFL players continued their protest to remind us how badly they think America sucks. And how much they dislike police officers.

Here’s the problem with that — you’re making us remember how much we dislike your divisive politics seeping the diversions that were intended to unite and entertain us.

But don’t complain about the results when you’re done.