Trump caught Hell from the Left for daring to mention the Visa status of the New York Terrorist. Does this news vindicate him?

One of the biggest dividing lines in politics 2016 was the attitude toward lax immigration policy.

Non-enforcement of the laws that ARE on the books was one aspect of it. See: ‘sanctuary cities’.

The porous border that Drug Cartels can cross almost at will was another aspect of it. “Build that big beautiful wall!”

And throwing open our doors to people from around the world to people whose values and motives are completely unknown to us.

And if that weren’t enough, we have this, too.

Europe is reeling from the effects of exactly that sort of policy.

Canada is deliberately ramping up their immigration.

But Trump took a lot of heat for pushing back the other way.

And he broke the story to America that this NewYork Radical Islamist terrorist was here on something called a ‘Diversity Visa’. 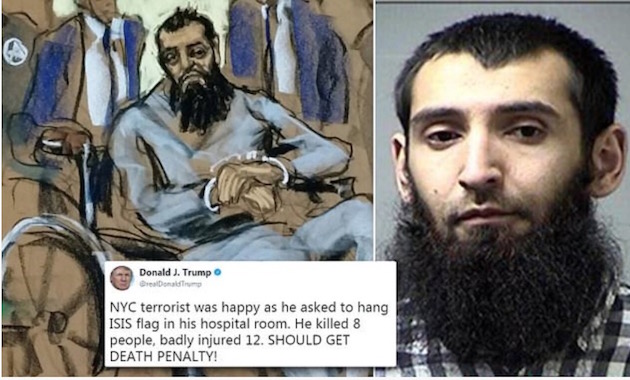 It was cooked up in 1990 to deliberately open up immigration to parts of the world that were not finding their way into America by reason of Merit. As though America has some obligation to accept immigrants from anywhere and for any reason.

We are fighting hard for Merit Based immigration, no more Democrat Lottery Systems. We must get MUCH tougher (and smarter). @foxandfriends

Hear President Trump himself say just how many OTHER people gained access to America because he ‘won the lottery’.

CHAIN MIGRATION must end now! Some people come in, and they bring their whole family with them, who can be truly evil. NOT ACCEPTABLE! pic.twitter.com/PQGeTTdRtX

To our knowledge, 23 people.

Are they ALSO the kind of people who would sit in a Western Hospital room — after murdering eight, and wounding dozens — and demand an ISIS flag to hang?

We don’t know. And that’s the point.

They didn’t come to America because they had demonstrated any affection or allegiance to America and her values. Nope.

Nor because they showed they could be a net contributor to the rich fabric of our society.

Do you really believe this guy had the capacity to support 23 people?

And are you REALLY confident about the kind of people he would bring with him? He didn’t think twice about mowing down pedestrians and cyclists before ramming a special-needs school bus.

Would you take his recommendation about any ‘hardworking’ prospective ‘newcomers’ now that we have seen his true nature?

They didn’t understand this basic nugget of wisdom from Mark Twain: