President Trump is the King of left-handed compliments — or is this one a back-hand?

After LaVar Ball’s bizarre CNN appearance and his continued refusal to acknowledge President Trump’s role in the release of LiAngelo Ball from potentially 10 years in a Chinese prison, the Commander In Chief shot back at the ungrateful father in a couple of early morning tweets.

You’d think that LaVar would be grateful, especially this close to Thanksgiving.

Doug says that LaVar is a prime example of what’s wrong with this country, and here’s why:

LaVar Ball has said that his son ‘made a mistake’.  Yeah, we get that.

We all make bad choices.

But this was practically a crime spree — 3 stores had things stolen in 90 minutes.  The only item mentioned was a pair of Louis Vuitton sunglasses, which ClashDaily reported run anywhere from $435-$1990 US according to their website.  That’s not chump change.

Do you think that the Chinese Communists who are known to have an atrocious human rights record would be easy on foreigners that stole?  That’s highly unlikely.

President Trump intervened immediately and had the three sticky-fingered UCLA b-ball players released from a communist prison in China.

The father of LiAngelo Ball, one of three UCLA basketball players arrested in China accused of shoplifting earlier this month, questioned what Trump did to free his son when he appeared on CNN Tonight on Monday.

Today Trump hit back with a 5am Twitter rant in which he branded him a ‘fool’ and compared him to legendary boxing promoter King.

Here are the awesome tweets:

It wasn’t the White House, it wasn’t the State Department, it wasn’t father LaVar’s so-called people on the ground in China that got his son out of a long term prison sentence – IT WAS ME. Too bad! LaVar is just a poor man’s version of Don King, but without the hair. Just think..

…LaVar, you could have spent the next 5 to 10 years during Thanksgiving with your son in China, but no NBA contract to support you. But remember LaVar, shoplifting is NOT a little thing. It’s a really big deal, especially in China. Ungrateful fool!

This is so beautiful because Don King is an absolute legend when it comes to sports promotion.  He’s also a friend of The Donald Who Became President and still keeps in touch with him.

King was even stumping for him on the campaign trail: 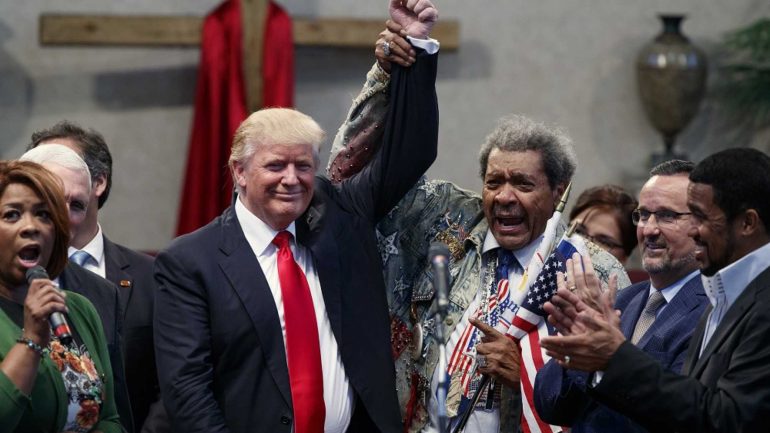 King was known outside of the boxing community for his wild hair and even wilder personality.  In saying that LaVar is like ‘Don King without the hair’, he’s saying that Ball isn’t all that memorable.  Was President Trump saying that LaVar is as effective at controversy and promotion as Don King?  We may never know.

What we do know is that President Trump is shoving the truth in LaVar Ball’s face.

What LaVar chooses to do with that truth is up to him.

I’m thinking that the Trump Derangement Syndrome that LaVar Ball is suffering from is chronic and he won’t be able to acknowledge President Trump’s intervention.

There’s one way to solve this, but LaVar likely doesn’t have the humility to take those steps.