A 30 foot tall Christmas tree was erected in Baghdad, Iraq to celebrate both Christmas and the Iraqi Security Forces victory over ISIS.

The Islamic State extremists have been expelled from Iraq and their territory, as well as the number of fighters, continues to dwindle.

Iraqi Christians have raised a 30-ft. tall Christmas tree in Baghdad to celebrate both the holiday and the expulsion of ISIS extremists by Iraq Security Forces. pic.twitter.com/e96oaR5neN

Which was then retweeted by White House Press Secretary, Sarah Huckabee Sanders:

Thank God for the President's leadership in fight to defeat ISIS https://t.co/zsewP7cIuc

Liberal heads did this:

So… lemme get this straight…

Iraq — a predominantly Muslim country — is more tolerant of Christian symbols than America?

For years anti-religious folks have been protesting Nativity scenes.

As a matter of fact, a topless Femen protester tried to steal the baby Jesus from the Vatican nativity scene.

This year, the LGGBDTTTIQQAAPP lobby has tried to use Christmas to push their agenda. 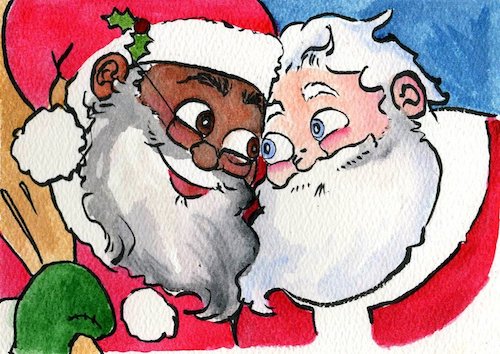 And the same-sex nativity scenes that are being called ‘gay-tivity’ scenes:

Meanwhile, in Iraq, a traditional Christmas tree is erected in Baghdad.

Last year, in the same spot, an 85-foot-tall, 33-foot diameter tree was placed there by Muslim businessman, Yassi Saad, to unite with ‘our Christian brothers in their holiday celebrations and helping Iraqis forget their anguish.’   Last year’s tree cost Saad $24,000.  It is unclear if he was involved in this year’s Christmas tree.

When did we become less tolerant of Christians and Christmas than the Iraqis?

Well, with the new Christmas-loving President, the leftist can stuff it.

And so can ISIS… or should that be WASWAS?